Energy Star (E*) is a dynamic government/industry partnership that offers businesses and consumers energy-efficient solutions, making it easy to save money while protecting the environment for future generations.

The US Environmental Protection Agency (EPA) introduced Energy Star (E*) as a voluntary labeling program designed to identify and promote energy-efficient products to reduce greenhouse gas emissions. Computers and monitors were the first labeled products and the program was later expanded to include additional office equipment products as well as residential heating and cooling equipment. In 1996, EPA partnered with the US Department of Energy to add more product categories to the program. The E* label is now on major appliances, office equipment, lighting, home electronics, new homes and both commercial and industrial buildings.

Through partnerships with more than 7,000 private and public sector organizations, E* delivers technical information and tools that organizations and consumers need to choose energy-efficient solutions. The program has successfully delivered energy and cost savings across the country, saving businesses, organizations, and consumers more than $7 billion a year. Appliances and equipment with this logo on them are part of the E* program.

Goodwill Communications was retained to help launch a national, multi-media public service advertising campaign. The distribution plan targeted more than 15,000 English and Spanish media outlets. In addition to implementing the campaign, we provided ongoing counsel to the EPA team on the most cost effective techniques for maximizing campaign exposure.

For example, during initial planning stages there were three different TV PSA themes that each had their own PSAs. Initial plans were to distribute all of the PSAs simultaneously. We advised distributing them in separate waves, which would avoid the PSAs competing against each other and result in much greater exposure. To reinforce our position, we conducted a gatekeeper survey among TV community affairs directors who concurred with our recommendation.

Pre-campaign and on-going promotional activity was an important campaign tactic. Prior to launch, blast faxes and a unique Emailgram were distributed to broadcast community affairs directors t them background information on the program. The Emailgram permitted TV and radio stations to view or listen to the PSAs and provided website links where they could get more information on the program. We also produced a feature story on the program for our proprietary newsletter called Broadcasters Café which was distributed to all TV stations receiving the PSAs. 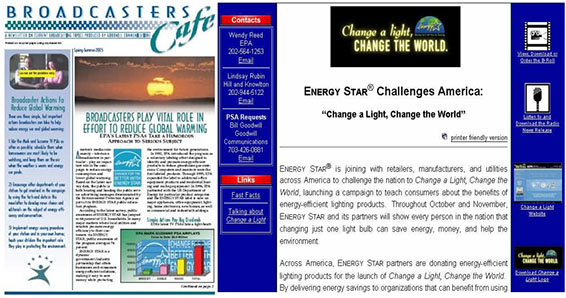 To broaden the media mix, we also employed shared-reel distribution strategies to reach cable TV and radio stations at the lowest possible cost. Using our proprietary CablePAK and Radio DiskPAK distribution programs, the E* PSAs were distributed to 500 major cable stations and 3,000 radio stations. Since they were distributed along with other client PSAs in the same package, the cost was about one-third the cost of sending each station a separately packaged PSA.

Unfortunately, due to talent and music restrictions that were negotiated prior to our getting involved with the E* campaign, we were precluded from editing longer length radio PSAs to create a 15-second spot. Since shorter PSAs are more frequently used by many radio stations this would have limited radio usage. To rectify the situation, Goodwill Communications hired a radio producer to create a 15-second PSA using library music that was identical to the custom music used on the 60-second PSA, resulting in $482,455 worth of additional exposure that would have otherwise not occurred.

Perhaps our most important contribution to the E* effort was to recommend better packaging of print PSAs and an aggressive print PSA distribution plan, particularly targeting major magazines. We developed a much more user-friendly PSA package, placing all PSAs on a CD along with a user’s guide showing what was on the CD.

Initial plans called for targeting no newspapers and a very limited number of magazines that had supported the program in the past. Our recommended distribution plan included over 5,000 daily and weekly newspapers that regularly use PSAs as well as a custom list of 3,000 magazines.

While EPA research data showed that the E* program was achieving its penetration goals in most U.S. markets, there were a variety of areas where exposure was very weak.

To try to reverse these trends, EPA teamed up with various community partners to expand their reach at the local level. We supported the effort by tagging TV PSAs for a variety of different local organizations including local Public Interest Research Groups (PIRGs), along with local offices of the Consumer Action Network and the Consumer Federation of America.

Out of Home Media

The E* message was also cross promoted with other energy saving organizations such as the Alliance to Save Energy. Shown here is the huge Panasonic Board high above Times Square which cast a spotlight on the Alliance to Save Energy’s “Super Powers” TV PSA with its home energy efficiency/E* message. The PSA aired every hour for a month for a total of 9,600 airings worth more than $100,000.

To reach policy-makers in Washington, DC, PSA posters were displayed at bus stops around the nation’s capital.

As with all the TV PSA campaigns we distribute, we conducted extensive evaluation of the E* program and posted evaluation reports to a password protected website we created for EPA on what we call the PUBSANS (Public Service Advertising Analysis System) GATEWAY.
Data was compiled from the A.C. Nielsen SIGMA electronic tracking service and a Nielsen audience data package that provides Gross Impressions. National staff and community partners can access evaluation data from the EPA reporting portal site and download the usage data into various software packages for further analysis and manipulation.

More importantly, the campaign is impacting consumers. With the help of Energy Star, Americans saved enough energy to power 10 million homes and avoid greenhouse gas emissions equivalent to those from 33 million cars – all while saving $18 billion on their utility bills. The success of the EPA campaign is a reflection of good creative, a solid distribution plan and an issue that is becoming increasingly more important to both the media and the general public.