Establishing a dialogue between parents and teens

SEEKS TO ESTABLISH DIALOGUE BETWEEN PARENTS AND TEENS

Underage drinking continues to be a national public health issue in the United States, especially among adolescents. Alcohol is the most widely used substance among America’s youth, contributing to the three leading causes of death among 12- to 20-year-olds: unintentional injury, homicide and suicide. Further, underage drinking has severe consequences, many of which parents may not be fully aware, such as injury or death from accidents; unintended, unwanted, and unprotected sexual activity; academic problems; and drug use. 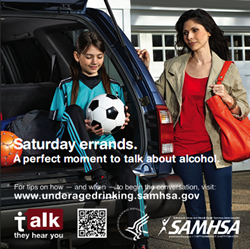 To address this important problem, the Substance Abuse and Mental Health Services Administration (SAMHSA) launched a national PSA campaign with the theme: “Talk. They Hear You.” Its goal is to reduce underage drinking among youth ages 9 to 15 by providing parents and caregivers with information and resources they need to address the issue of alcohol with their young children.

The multi-year campaign features a series of TV, radio, print and out-of-home PSAs in English and Spanish. The PSAs show parents “seizing the moment” to talk with their children about alcohol. By modeling behaviors through these PSAs, parents can see the many “natural” opportunities for initiating the conversation about alcohol with their children.

Goodwill Communications was selected to distribute and evaluate the campaign, which is now in its 12th year. Some of our campaign tasks include:

This graphic shows the number of media outlets targeted in just the past three years:

As we do with most of our client campaigns, we used several tactics to ensure the media was aware of this most important issue, which included: 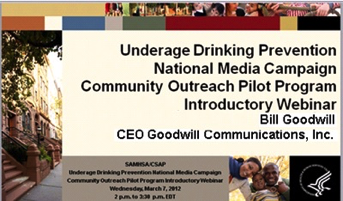 One of the campaign strategies was to develop a strong network of partners comprised of 40 partners including other government agencies, as well as prevention, retail, health care, community, and school-based organizations.

They helped disseminate campaign messages via talking points, factsheets, infographics, social media and e-mail templates. We also conducted a Webinar for SAMHSA national staff, their partners and stakeholders to explain the campaign distribution tactics and how to access online reports.

To reach parents and influencers, we deployed a strategic outdoor PSA effort, which resulted in posting outdoor messages in airports, shopping malls and on the Washington Area Metro Transit Authority’s bus and subway system. Additionally PSAs were shown on Walmart’s closed-circuit TV screens in 540 of their big-box stores, reaching 39 million monthly shoppers.

SAMHSA administered a national Web survey to establish baseline attitudes, beliefs, and behaviors linked to underage drinking. After the campaign was launched they assessed longitudinal changes in underage drinking prevention behaviors and attitudes over a 3-month period. Some highlights include:

In terms of media values, the campaign has generated just under $60 million in verified advertising equivalency value. 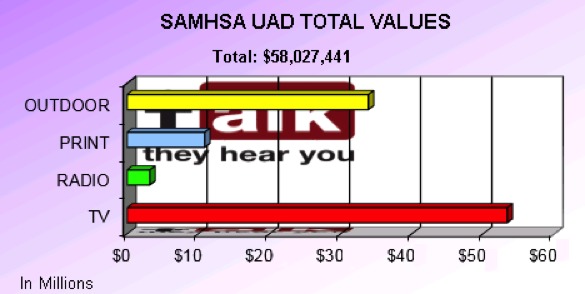 For more information, go to: www.underagedrinking.samhsa.gov.