HOW WE HELPED BRIGHT FOCUS CUT COSTS AND INCREASE VALUE
As the sub-contractor to a video producer, we worked with the American Health Assistance Foundation for years, distributing PSAs pertaining to eye health, Alzheimer’s, heart disease and stem cell research. The creative for the PSAs was reasonably well crafted, and we distributed them in the normal fashion. 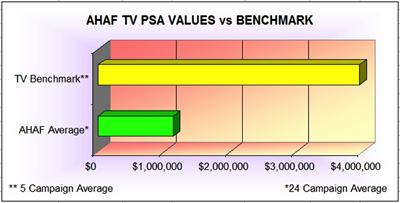 However, one of the problems with our arrangement – which is often the case – is that we were never given the opportunity to meet the client, learn their marketing objectives, or express any ideas about how to improve their PSA campaign. In our view, that was one of the reasons that their PSAs attained less value than our benchmark for a typical PSA at the time.

Later there was a significant change in the overall management structure for the Foundation, which resulted in a name change, (Bright Focus Foundation) and a different program focus, with only two issues to be addressed – eye health and Alzheimer’s.

Along with rebranding their foundation, they also wanted to investigate new ways to get their message out to the public. That process could have posed a conflict with the company that was producing their PSAs, so they asked Goodwill Communications to provide some creative options.

We had distributed some PSAs created by a very talented creative director who produced the PSAs on family values for the Mormon Church, campaigns for the Salvation Army and other non-profits. The PSAs this talented individual produced have some elements that make them rise above the pack – great script writing, lighting and interesting stories about social issues.

When you watch the PSAs he produces, you are looking for a napkin to wipe the tears away from your eyes, and anyone who can generate tears from a TV spot, is the guy to hire.

Based on our recommendation, the Bright Focus Foundation hired the person we recommended to produce a PSA on vision health. His approach was to use various scenarios that we all hope to see, including ou r best friends, famous landmarks, or a family marriage. The theme for the campaign was “What Would You Like to See?” The call to action was to get regular eye exams to catch vision problems before they got worse and perhaps untreatable. 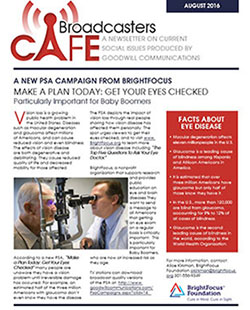 As we do with most of our TV PSA campaigns, we created a custom newsletter that was sent to over 1,200 broadcast TV outlets and 200 national networks.

To further diversify our media mix, we added cable distribution to our plan, targeting 500 cable stations as part of our CablePAK compilation service, which added just over $4 million to our total values. Finally, we added 5,000 radio stations to our distribution plan targeting stations that had used our client PSAs previously.

Evaluation
This graph shows the PSA values resulting from the campaign where we hand-picked the producer, as compared to the average values of the previous producer.

The producer we recommended also created TV and radio PSAs in both English and Spanish at a significantly lower cost, which greatly increased the overall cost-benefit return.

The real message from this case history is: