Resonating with media gatekeepers – US Navu

In our ten years of working with the U.S. Navy Recruiting Command, one of the more controversial recommendations we made was to re-position its PSA program, focusing less on a strong recruiting message and emphasizing its community service work. 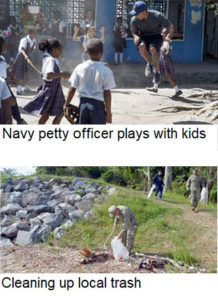 There were several reasons for our recommendation and it helped to generate millions of dollars in additional PSA support. Some of them included:

Our goal was to find a way to get Navy’s message out to gatekeepers in a format that both represented Navy’s recruiting interests, as well as those of the local gatekeeper. In doing research on programs that might lend themselves to a viable PSA strategy, we learned about the Navy’s Community Service Program (CSP).

The CSP consists of Navy volunteers working in the areas of physical fitness, environmental cleanup, tutoring and mentoring at local schools, meal preparation for disadvantaged individuals, and anti-drug programs performed at the community level. This program appeared to be the perfect solution to our dilemma.

Knowing this was the answer to our problem, we convinced Navy to focus its future PSA efforts on this unique community program. There was some internal controversy over this change in strategy, due to the fact that the CSP messages did not impart a strong recruiting message. 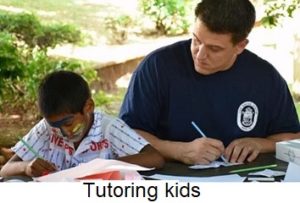 However, our belief was that Navy’s paid advertising already fulfilled that marketing objective, and the PSAs should have a message that was relevant to local communities, because that’s what gatekeepers wanted. Navy advertising staff agreed to test our theory by creating a series of TV PSAs around the Community Service Program.

In their PSAs which described how Navy personnel were helping strengthen local communities, they also had scenes about how Navy defended us from foreign threats, thus the themeline of “Serving America Twice”.

Not long after the campaign was launched, our repositioning strategy began to pay dividends. This graph uses evaluation data from the A.C. Nielsen SIGMA tracking system. 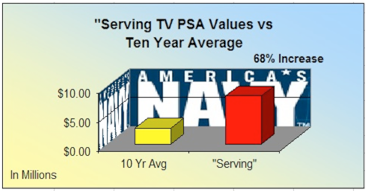