The Make-A-Wish Foundation is a locally driven, community-based organization with 80 chapters around the country and 25,000 volunteers dedicated to their cause. The spirit of these tireless workers is infectious, as any attendee at their annual conference will see. When you are talking about giving kids with life threatening medical conditions their greatest wish, it is not difficult to get energized.

From a PSA distribution standpoint, MAWF’s chapters are community activists who play a very strong role in deciding which media outlets get PSA materials. They also make follow-up contacts to provide the all-important local angle to the Make-A-Wish story. Our role was to provide the media intelligence to them, along with other tools to gain valuable media exposure.

In the PSA world – just as in politics – localism matters. Local media derive their income from the local community, not from a national source, therefore any way non-profits can localize their issue the better it will resonate with local media. To reinforce our position on this subject, we conducted a survey of 1,000 broadcast TV stations. Of the respondents, 80% of them indicated that “local information/benefit” was most important to them. 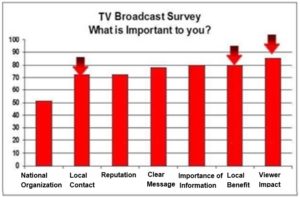 When we began to correlate the local MAWF chapters to our national database, we learned that the coverage area for each MAWF chapter did not follow normal geographic breakouts such as city, state, or zip code. This meant we had to create custom software to match the zip code for each chapter with all the media outlets in our master database. These distribution reports are posted to the MAWF reporting portal along with various kinds of information for local community outreach staff, including how to access on-line lists, evaluation methodology, and a primer on how to make contacts in the local community. 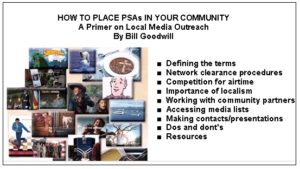 Unquestionably local media outreach specialists, know the media in their community better than we could ever know them at the national level.

Accordingly, we created an online procedure that permits local chapters to change their distribution lists in real time. If local chapters have media contacts that are not on our list, they can add them, or delete ones they do not want, along with making contact changes such as shown below. They then feed those changes to us via an automated email, so we can create final distribution lists. Once the lists are finalized, they can also export the data to an Excel spreadsheet for further customization. 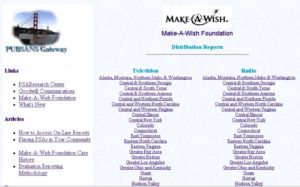 Another feature of our MAWF on-line distribution reports, is that we provide “actionable” data for each chapter. Rather than just posting distribution lists, we provide a historical record of which stations have and have not used MAW PSAs previously.

For example, we show the Previous Usage Index (PUI) for the station, (the number of times that station has used other client PSAs) and an indication if they are a current MAWF user or not. Complete contact information for the outlet is also provided. With this data, local chapter outreach staff can see very quickly which media are or are not using their PSAs, and prioritize those for contact. 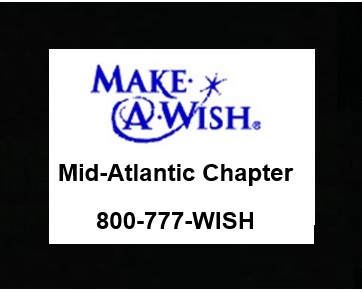 The final – and very important – dimension of Make-A-Wish TV PSA localization, is to create tags for all 80 chapters, a daunting task, given the fact that there are six different video tape format possibilities for each of the chapters. This means there are 480 chances for something to go wrong in terms of getting the correct format to stations with the correct tag. However we have done this for many clients and have a system that works every time.

By adding tags to the end of a PSA, stations are more inclined to use them because it adds a local touch, and localism is very important to all media. We began by developing an online procedure to permit chapters to tell us if they wanted their PSAs localized or not, and the information that was to appear on the tag. Using this information, we then created a national tagging worksheet which is used by the dub house to replicate the correct quantity of tapes, in the correct tape format and with the correct ending tag information.

In some cases where local MAWF chapters have strong working relationships with the media in their community, they may want to deliver the PSAs personally. Again, using an on-line procedure, local chapters can indicate which stations they want to contact personally, and how materials are to be delivered – to them or to the station.

Evaluation reports for each chapter were posted to the MAWF evaluation portal for access by local outreach staff. Once they made local contacts, they could then see if the stations they contacted showed up on subsequent evaluation reports. At the end of the campaign we also produced lists of TV stations that have used other client PSAs, but had not used MAWF materials. 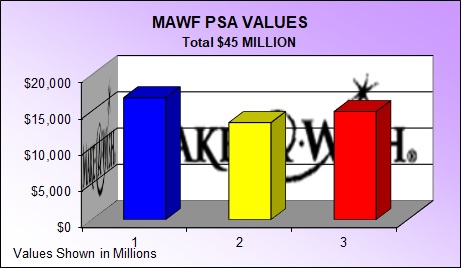 In summary, most non-profits do not have such an extensive network of high-energy chapters such as the one that the Make-A-Wish Foundation has developed. However, in the three years we worked with them, their campaigns averaged $15MM per year, which set a new record in PSA campaign attainment for any of our client campaigns. The combination of a very important issue, solid distribution procedures and motivated local chapters provided this winning combination.