VOLUNTEERS STEP UP TO THE PLATE FOR “ARE YOU IN?”

Sometimes when distributing a PSA campaign, the stars are all in alignment. The quality of the creative production is excellent…the PSA was produced in various lengths…it has a local angle….it involves both young people, as well as sports mentors, and it was sponsored by a very respected national human services organization. When you get a PSA with these qualities, then you know it is going to be a hit with the media.

Such is the case with a TV and radio PSA campaign distributed by Volunteers of America and the Major League Baseball Players Trust, with the theme “Are You In?” This unique partnership was designed to encourage high school students to get involved in their communities, and help those in need. It is called “Action Team” – a national youth volunteer program designed to inspire and train the next generation of volunteers. Youth volunteers, along with Major League baseball players have formed Action Teams to deliver an important message – volunteering is fun and personally rewarding!

Through the Action Team 51,000 high school students have helped over 173,000 of their neighbors in need by getting involved in their communities. Action Teams in more than 160 high schools in the U.S., Puerto Rico and Japan feature the personal involvement of active Major League baseball players who help raise public awareness about the benefits of volunteering. In a recent school year, more than 800 Action Team Captains have planned more than 400 volunteer projects in their communities. Action Team members recruit fellow high school students to volunteer in projects which address local community needs.

The program goal is to help others — whether it’s out in the community, or inside the classroom. Service projects vary in each school but may include:

“The Action Team program takes some of the burden away from those in charge of a school’s service-learning or community service program,” said Tanisha Smith, National Director of Volunteer Services for Volunteers of America.

She went on to say that “Our two primary objectives are growth and engagement. Our short-term goals include reaching 200 schools; and having a presence in all 50 states (we’re currently in 33). Our longer term goal is to continue to grow the program globally and engage many more youth.”

While the types of local activities that students can pursue are diverse, Action Team Captains have to organize a minimum of two community service projects during the school year. These can be food or clothing drives, or other events such as landscaping and beautification projects, interactive sports tournaments or similar activities. They are also required to present to groups of other students in their school, where they will distribute the Action Team brochure and show an informational video on the program. Before the end of the school year, Action Team Captains submit a written reflection about their volunteer experiences as members of the Action Team.

To encourage schools and students to participate in the program, Volunteers of America and the Players Trust launched a national public service advertising campaign comprised of TV (broadcast and local cable) as well as radio public service announcements.

The 2011 TV PSAs include Carlos Peña (Houston Astros), Chris B. Young (Oakland Athletics) and Michael Young (Philadelphia Phillies) and more than 30 high school students from the Dallas/Ft. Worth area – most of them members of the Action Team. Together, they perform various volunteer activities, encouraging students, teachers and administrators to join them by asking: “Are you in?” The call to action is to visit the Web site at: http://www.actionteam.org, where schools can download an application to start their own local Action Team.

The TV PSAs were sent to more than 3,700 TV and radio stations in all 50 states and to 105 national broadcast and cable networks. This is the first campaign we have distributed in the past 33 years to exceed $100 million in value. The following table shows some key usage data: 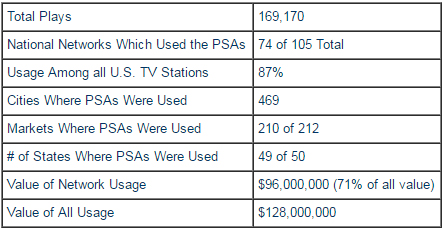 One of the software tools that we provide to clients is an interactive map which shows the extent of TV PSA usage by state, according to four different levels of usage, ranging from “none” to “high.” As shown here, there is only one state where there was no usage where TV stations exist – New Hampshire – with Delaware having no broadcast stations. Many of the biggest states with large populations are in the “high” column, and almost all states that have heavy populations are in the “Moderate” column. 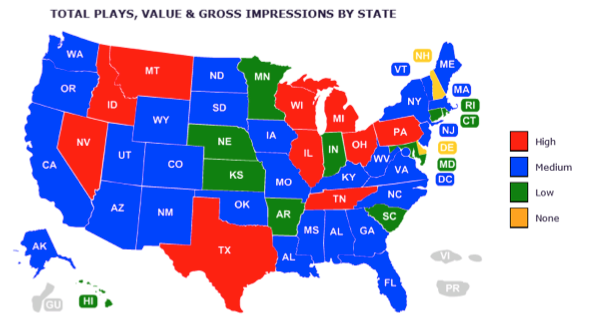 To date, the Action Team PSAs are the most successful of any that Goodwill Communications has distributed in the past 30 years, and we had almost nothing to do with the success of this campaign. What made it successful was that it hit all the hot buttons that the media regard as important to them in their communities. We just happened to be the agent fortunate enough to work on this most important campaign with an even more important mission.