HOW PSAS CAN SUPPORT RECRUITING

Over the years, Goodwill Communications has distributed dozens of PSA campaigns to support recruiting, mostly for our armed forces. However, the best evidence we have to demonstrate how PSAs can help recruit volunteers, is to review our six years of working with the Peace Corps. The basic marketing objective was to get volunteers to serve overseas using the theme line: “The Toughest Job You’ll Ever Love.” Each of the campaigns were multi-media in scope, including broadcast and cable TV, radio and print media.

Prior to our involvement, the Peace Corps did very little marketing except for a limited direct mail program and some paid print ads in college newspapers. We changed this approach by developing a very comprehensive PSA program comprised of: 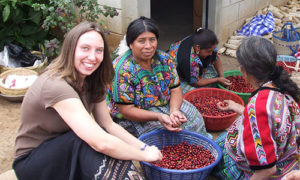 In the earlier years, the creative focus of Peace Corps TV PSAs was on their international mission.

However, U.S. media gatekeepers are more concerned about local issues and the domestic impact of the campaigns they air.

Accordingly, after several waves of PSAs were distributed, we recommended that Peace Corps shift its creative strategy slightly from an international focus to the domestic benefits that are derived here at home from Peace Corps volunteers’ work.

This slight re-positioning of Peace Corps creative strategy translated into significantly greater use of Peace Corps PSAs, because local public service directors began to recognize the importance of the Peace Corps mission in light of its local impact. 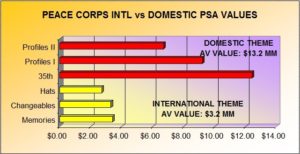 This graph shows the TV PSA values for the first three PSA campaigns, which had an international theme, as compared to the values from the next four campaigns, with a domestic message. The local message was that after serving overseas, Peace Corps volunteers come home to put their experience to work in strengthening local communities in the U.S.

Our distribution strategy was to use broadcast TV to reach adult influencers, including parents, coaches, guidance counselors, etc. who make recommendations to students on their future career options.

Underneath that broad strategy was our plan to use targeted media to reach young people where they live, work and play, including youth oriented radio stations, print media and an online marketing effort to place Peace Corps banner ads on youth-oriented websites.

Other ways we extracted more value for the Peace Corps PSA program was to distribute a half-hour Video News Release (VNR), which was sent to leading cable systems celebrating the 35th anniversary of the Peace Corps. The VNR was shown on 76 cable systems just under 2,200 times and generated $2,135,310 in value. 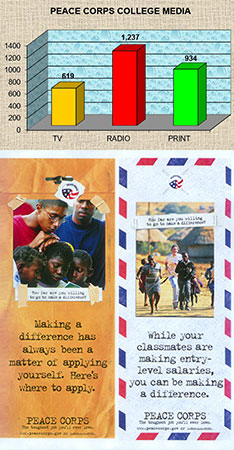 Finally, to increase awareness among college students – their primary audience – we added a total of nearly 2,800 college media outlets to our distribution plan as shown in this graph. Over 630 of these outlets used Peace Corps PSAs.

The print ads were not designed to communicate with an older audience; they were designed to look like a college student created them, because we felt that would resonate with young people. They had very unusual graphics and type since that is the approach that would be effective among young people.

One of the challenges that any organization faces when they implement a PSA campaign is how to connect with their internal audiences. For Peace Corps, this is critically important because local public affairs staff and outreach specialists are the key to successful PSA placement.

At the inception of our work for Peace Corps, we developed software for linking regional offices with the 30,000 media outlets in our master database. This linkage enables us to break out all PSA distribution lists and evaluation reports by each Peace Corps regional office.
This, in turn, helps generate field support for the national campaign by involving regional public affairs specialists in campaign execution. Regional Public Affairs Specialists not only know where their PSAs were distributed; they know the rationale behind media selection, and they can easily see which media outlets in their community have, and have not, used Peace Corps PSAs previously.

The first step in this intelligence-sharing plan is to create a custom online website for Peace Corps outreach staff.

All the tools they need to do an effective local marketing job are on the Peace Corps Online website including: 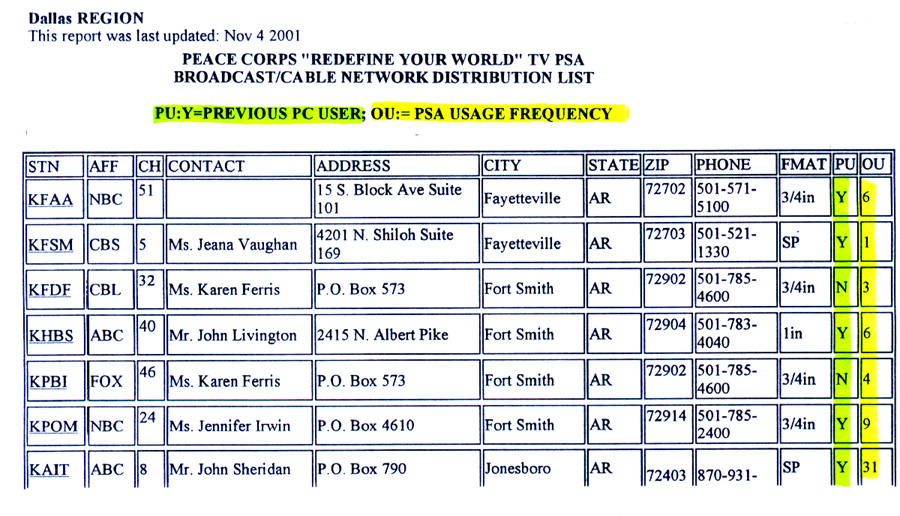 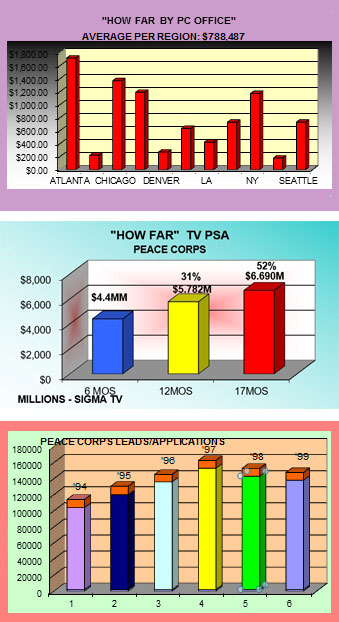 Presenting a linkage between distribution and evaluation in this manner provides public affairs specialists with an action plan for media follow-up. From the national perspective, breaking evaluation reports out by Peace Corps regions also provides headquarters with intelligence data on areas of the country where PSA exposure is weak or non-existent.

Our ability to break out evaluation data by regional offices is far more useful than looking at a national PSA usage report by city. The above graph shows PSA usage by office, and it is easy to see which offices are under-performing a standard or average.

The other important decision we urged Peace Corps to make is to extend Nielsen tracking of its PSAs from six months to a year or even longer.

When we handled Peace Corps’ PSA program, lead generation grew significantly for the first four years from 102,172 to 151,137.

During each of these years, Peace Corps distributed two PSA campaigns per year. Then, in 1998 some interesting trends began to develop. Only one campaign was distributed in 1998 and in 1999. As we can see from the graph, leads also dropped from the high point in 1997 to 135,767 in 1999, a decrease of 11 percent.

Based on data for the first two months of 2000 Peace Corps leads continued to decline. Our analysis indicates that on average, the Peace Corps generated 10,862 leads per month over the past six years when PSAs were being distributed compared to only 8,211 per month for the first two months of 2000 when they were not. This trend data suggests there is a direct correlation between lead generation and PSA activity. 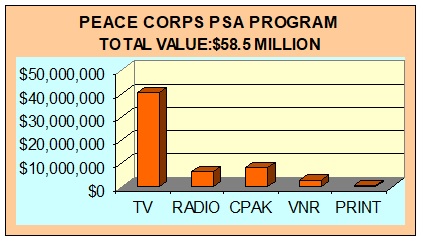 Our work for the Peace Corps generated just under $60 million in verified advertising exposure. Perhaps more importantly, the Peace Corps created a solid core of media outlets that are regular users of their PSA materials including 1,475 television and cable stations, 3,500 radio stations, and nearly 1,500 print media which have used Peace Corps PSAs.