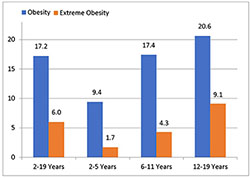 Following are some very scary statistics from PCRM:

Goodwill Communications was retained by PCRM to distribute a series of PSA messages to try to change the food choices of Americans, and youth in particular.

The first in the series was a PSA titled Dangerous which warned the public – and youth in particular – about childhood obesity and the health risks associated with it. The campaign included a radio PSA featuring the voice of actor Alec Baldwin.

As part of the campaign, PCRM created a special Web site, and a toll-free number, 877-685-KIDS. Parents can order a free copy of “Nutrition for Kids,” an 18-page booklet packed with delicious recipes and nutrition information.

In 2006, PCRM continued the campaign challenging parents to get kids to eat healthy fruits and vegetables and steer clear of high-fat fast food via a humorous TV PSA in which doctors perform an intervention on a fast-food restaurant called “Chubby’s.”

Real life PCRM physicians march into the restaurant and “make over” its menu by buying up all the fatty items like burgers and chicken nuggets and replacing them with healthy fruits, vegetables, and other vegetarian items—much to the shock of the restaurant staff. Similar to the previous campaign viewers were encouraged to call or go to a special website that was created for the campaign.

In 2006, PCRM expanded their campaign to include TV radio and print PSAs under the theme: Powerful Weapon as part of its Cancer Project.

The Cancer Project is a non-profit organization that advances cancer prevention and survival through nutrition education and research. It provides cooking classes, books, video programs, fact sheets, brochures, and a special website.

If there were a pill to prevent cancer, everyone would want a prescription, but the message from this campaign is that the chances of avoiding cancer are increased if we consume more fruits and vegetables. The TV PSA mimics the ubiquitous pharmaceutical ads, featuring a bean in the place of a pill. The campaign included a special Web site and toll-free number through which the public can order a free resource guide that includes prevention information, nutrition advice, and healthful, easy-to-prepare recipes.

The radio and print PSAs were packaged in colorful CD folders, distributed to 3,500 radio stations and 5,300 magazines and newspapers.

To continue the anti-cancer campaign, PCRM teamed up with Academy Award-winning actor Anthony Hopkins to create an important and thought-provoking PSA titled: “Technology,” which spotlights the power of a healthy diet to prevent and fight cancer.

The PSA segues to the hospital cafeteria, where we see doctors enjoying a healthful lunch as Anthony Hopkins announces, “And today, doctors are talking about what might be the most important weapon of all: the food we eat.” 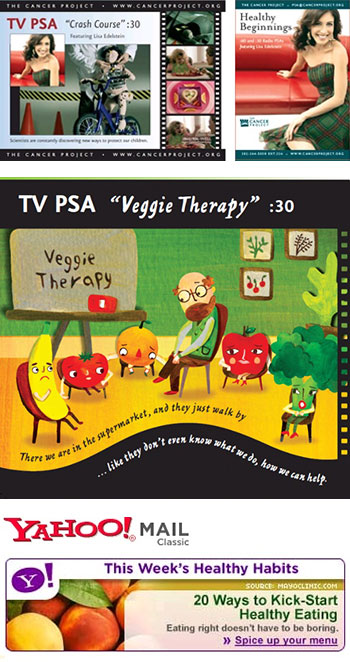 This campaign was followed by a campaign titled Crash Course narrated by actress Lisa Edelstein, who stars in the hit medical drama House. Lisa, a committed advocate for children, knows about the power of healthy diets. In this PSA, she notes how hard experts work to find new ways to protect children—and then explains the importance of healthy meals as the scene shifts to a mom feeding fruits and vegetables to her smiling daughter.

Another version of this PSA was titled Protective Gear, which observes that while parents teach their children to avoid danger and make smart choices, many are not learning healthy eating patterns that could protect them later in life.

The final PSA in this series was titled Veggie Therapy, a humorous, colorful, and animated spot where we see Mr. Banana, Ms. Broccoli, and other engaging fruits and veggies in a group therapy session voicing their feelings of rejection because they’ve been passed over in the supermarket for less healthful food choices.

“There we are in the supermarket and they just walk by, like they don’t know what we can do…how we can help,” the PSA laments.

The TV PSA campaigns alone that we distributed for PCRM generated $10,699,605 in ad equivalency value with average usage in 36 states. The values would have been much higher had PCRM produced longer (:60) for all their campaigns because longer spot lengths actually get a majority (57% on average) of all usage, contributing to much greater value.
Also, many of the campaigns provided only a :30 length which limited the usage by stations which may have had either shorter or longer availabilities.