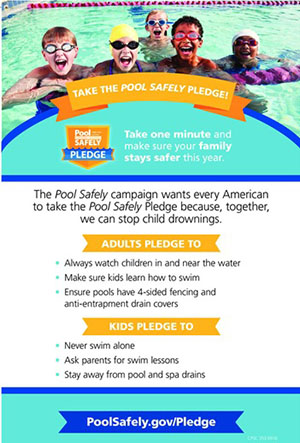 What if you could take a few simple steps to protect your children from hidden dangers in and around your home, would you do it? It is a rhetorical question, because what parent would not do whatever they had to do to protect the lives and safety of their most treasured possessions?

Yet, the fact is, many parents do not do basic things to ensure their children are not endangered in their own home, including drowning in pools or being badly injured by furniture toppling over on their youngsters. 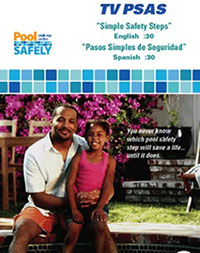 The CPSC had conducted extensive research which showed that children younger than age 5 represent more than 75 percent of all pool and spa submersion deaths and 78 percent of pool and spa submersion injuries in the United States involving children younger than 15 years of age. Further, their research showed that African-American and Hispanic children between the ages of 5 and 14 are at a higher risk of drowning.

Some of the earlier Pool Safely campaigns were disseminated to the media prior to migrating to a digital distribution procedure, so we designed colorful graphics packages for both TV and radio and in both English and Spanish. The earlier campaign TV PSAs were distributed to 1,000 TV stations and 53 national networks. TV PSAs as well as to 500 cable stations as part of our CablePAK compilation distribution service. 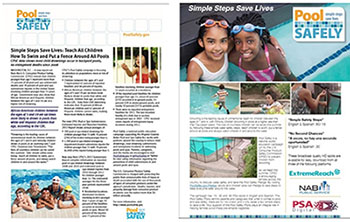 As we do with all of our client campaigns we aggressively promoted the Pool Safety campaign to the national and local media: 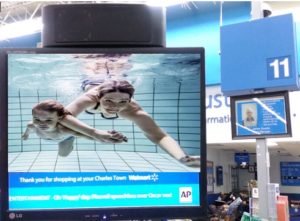 Our TV outreach specialist personally contacted 153 national cable networks to pitch the PSAs resulting in 2,000 airplays on 29 networks and a value of $1,040,155. 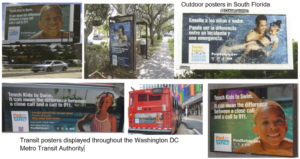 Due to the longer swimming season in warm weather states, we placed 108 outdoor posters in Arizona, Texas, California, South Florida and throughout the Washington Metro Area Transit system. This included interior and exterior bus posters, interior posters in subway cars and on subway platforms. The value of this exposure was $102,600.

This graph shows the values by media type which reinforces the importance of using a broad media mix when trying to reach a diverse audience. 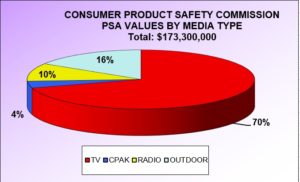