To gain a better understanding of public perceptions about the social security issue, SSA launched a consumer research project conducted by the Gallup Corporation, titled: “Public Understanding Measurement System” (PUMS). The key findings of the survey are shown in the graphic.

On a less positive note, the PUMS data indicates a reduced level of knowledge among several demographic groups, including those in the 30-49 age bracket, African-Americans and Asian-Americans. From the research, two things became clear:

One of the tools SSA used to accomplish these goals was to launch a series of multi-media PSA releases covering a variety of issues, ranging from the Supplemental Security Income program, to the Benefits Statement.
Goodwill Communications was retained to handle all post-production tasks for these campaigns.

The PUMS study did not ask specifically what media the public uses to get information about Social Security. However, the data does show that knowledge levels about SSA are directly influenced by the receipt of the SSA Benefit Statement, and that became the topic of a television PSA entitled “Quiz Show.”
The goal of the PSA was to let Americans know they will receive a Benefits Statement on the anniversary of their birthday.

To frame the PSAs, a set was built to emulate the “Millionaire” TV program and the host of the program asks several questions that pertain to Social Security benefits, only one of which is the correct answer.

The SSA “Quiz Show” PSA distribution plan is typical of all the campaigns we have distributed on behalf of the Social Security Administration. It included, in terms of priority:

We also distributed the Quiz Show PSA via the National Association of Broadcasters’ closed circuit feed to member stations and to 5,000 radio stations.

Several techniques were used to promote the “Quiz Show” campaign to internal and external audiences.

Subsequent PSA campaigns focused on a special website that SSA created called my Social Security which the public could access to see their benefits. We used similar promotional tactics to promote these campaigns, including an email campaign directed to media decision-makers and attractive packaging. 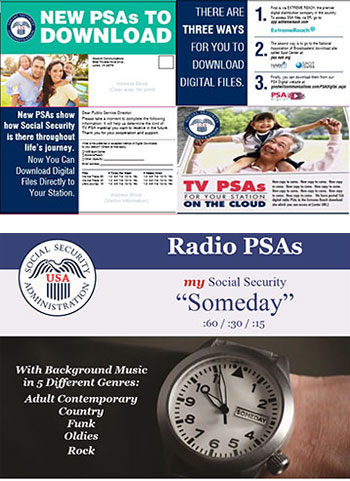 For later SSA TV PSA campaigns we distributed them digitally via Extreme Reach, the premier platform for delivering programming assets to the media.

To alert the media how and where they could download SSA PSAs, we developed attractive direct mailers which were sent to all stations.

For radio, we distributed SSA PSAs in five different genres which allowed stations to pick the ones that were most compatible with their program format.

SSA has 125 SSA local public affairs specialists placed in ten offices around the country. To engage them in our PSA campaigns, we created: 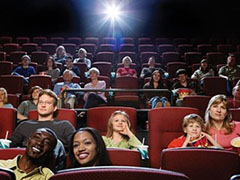 To try and reach younger audiences – many of whom do not believe Social Security benefits will be there for them when they retire, we coordinated a test of a SSA TV PSA in theaters located in five communities in the Washington, DC metropolitan area.

A total of 322 intercept surveys of moviegoers were conducted before the PSA was shown in theaters to assess baseline knowledge of key SSA copy points delivered in the PSA. On the last three days of a 28-day PSA test run, 310 interviews were completed to determine SSA knowledge of those same copy points.

The research showed that the percentage of moviegoers with correct responses to the five true/false survey statements increased from 47% before showing the PSA to 73% after exposure, a statistically significant improvement of 26 percent.

Given an expanded budget we began including outdoor billboards in our media plan placing SSA PSA messages on highways, local thoroughfares an in inner city locations. To see a presentation on our placements, go to:

Since we began working with the Social Security Administration, we have generated $256,435,392 in advertising equivalency value.

There is no question that PSAs have had a very significant impact on the ability of the Social Security Administration to reach its key audiences. While it is impossible to eliminate all non-PSA communications messages to determine the true impact of PSAs alone, suffice it to say that PSAs have unquestionably contributed to the nearly 60% of the American public which is “currently knowledgeable about SSA programs.”

For those who might be interested in the behind the scenes activity that went into making many of the SSA TV PSAs, you can view them at: http://www.youtube.com/watch?v=HzMa0wCCQ6Q