Every hour someone is newly diagnosed with multiple sclerosis (MS), a chronic, unpredictable disease of the central nervous system.MS destroys connection, disrupts signals, divides minds from bodies, pulls us from our lives and away from each other. Therefore, it is only fitting that connection would be its greatest enemy.

To demonstrate the importance of connections, the Society’s launched a PSA campaign titled: “MS Kills Connection >< Connection Kills MS” which reflects the stark reality of what MS does, but more importantly, how the challenges of MS can be overcome by strengthening and growing external connections.

The campaign features people living with MS, as well as those whose lives have been affected by the disease. Each person in the campaign reflects the human spirit of the many authentic stories and experiences across the MS movement. It demonstrates how connections help individuals address the impact of the disease and move their lives, and others, forward.

The “MS Kills Connection >< Connection Kills MS” PSAs were created by the renowned agency Wieden+Kennedy, which put Nike and many other famous brands on the map in the world of commercial advertising. They worked pro bono with the MS Society to increase awareness about the disease, its impact on people’s lives, and the need to get the public involved. 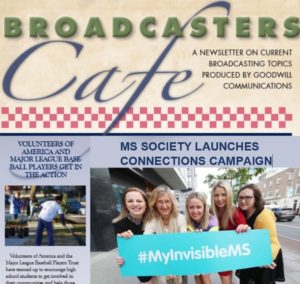 Goodwill Communications has worked with the MS Society since 1989, and for this campaign we employed all the latest tactics we have been developing for other clients in the past several years.

First, we began with an aggressive distribution plan targeting broadcast and cable TV, radio and print media. While the total quantity distributed was 7,500, the effective reach was just under 10,000 media outlets due to multiple station ownership in many markets requiring that we send only one PSA package.

We employed a variety of promotional activities largely centered on broadcast TV stations, because they typically provide from 70 to 80% of all PSA campaign values. First, we wrote a feature story on the Connections campaign for our proprietary newsletter, Broadcasters Cafe, which was inserted in all packages sent to stations. This helps to provide context and background on the issue and campaign. 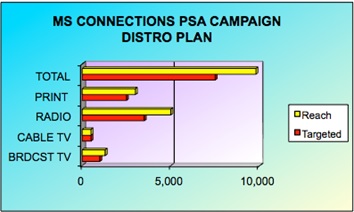 In addition to individual stations and networks, we also sent it to:

Next, we posted all the PSA files in digital format to our PSA Digital download platform, where stations can view and download broadcast quality digital files. We included a link to the download site in the MS newsletter story. The PSAs were also featured on the NAB download site called SpotCenter, and all NAB member stations received the PSAs via their closed-circuit distribution system. 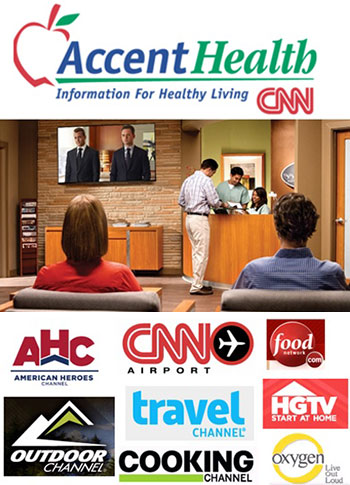 We distributed the PSA to specialty medical and health media, and one of those networks distributes its medical content to nine million physicians, 14 million nurses, five million healthcare workers, 89,000 hospitals, and 16,000 universities and medical schools. It was also sent to CNN’s Waiting Room Network in 30,000 physician offices across the country.

One of the most important tactics to stimulate usage of the Connections TV PSAs was to use our outreach specialist to make personal pitch calls to the 125 broadcast and cable networks on our distribution plan. In the evaluation section we discuss the impact of these calls and how we track network usage.

To reach local cable stations, we use our CablePAKTM proprietary distribution service which is sent to 500 major cable systems.

Using a “shared reel” distribution concept, we are able to lower the costs for sending PSAs to cable stations. The package includes a four-color newsletter and it also included the MS Connections feature story.

The MS Society is a chapter-driven organization, since that is where the real work to defeat MS is done. We have developed custom software to match the zip code for each chapter with our distribution database and that permits us to break out distribution and evaluation reports by local chapter. Public affairs specialists in each chapter can use the distribution lists in their outreach activities.

Chapters use a pull-down menu to select their particular chapter. Once the lists come on screen, they provide full contact information as well as a field called Previous Usage (PU). By sorting the lists on this field, chapters can easily see those outlets that have or have not used MS PSAs previously. They then can send letters or notes of appreciation to those that have used their PSAs in the past, and try to encourage non-users to air the current campaign materials.

As with all our client campaigns, we provide comprehensive evaluation data that is refreshed weekly. Clients get an overview of their campaign via an Executive Summary report that is auto-emailed to each client at the first of each month.

In addition to the executive summary report, we provide a wide variety of more detailed reports, including a network report.

This report is compared against our outreach specialists call worksheet to determine which networks committed to using our PSAs, to see if they actually did use them. For the Connections TV PSA campaign just over 40% of all values were generated by usage on 40 national networks – a total of 9,576 airplays. 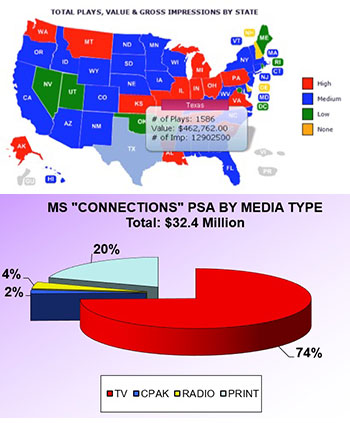 Perhaps the biggest surprise for the Connections campaign was the amazing results we generated from print media. Since we had such great success using our outreach specialist to contact networks, we decided to use her to contact major magazines and newspapers as well. Typically newspapers and magazines will generate from $200-400,000 in value. For the MS print campaign, we generated just under $6.5 million in ad equivalency value, including 49 print PSAs in the Wall Street Journal. Total circulation was 73 million readers.

One of the other very important specialized reports we provide is an interactive map of the U.S. showing PSA usage levels by four different ranges. The user can place their cursor over any particular state and see the key stats for that state.