How 4-h is teaching our youth to become community leaders 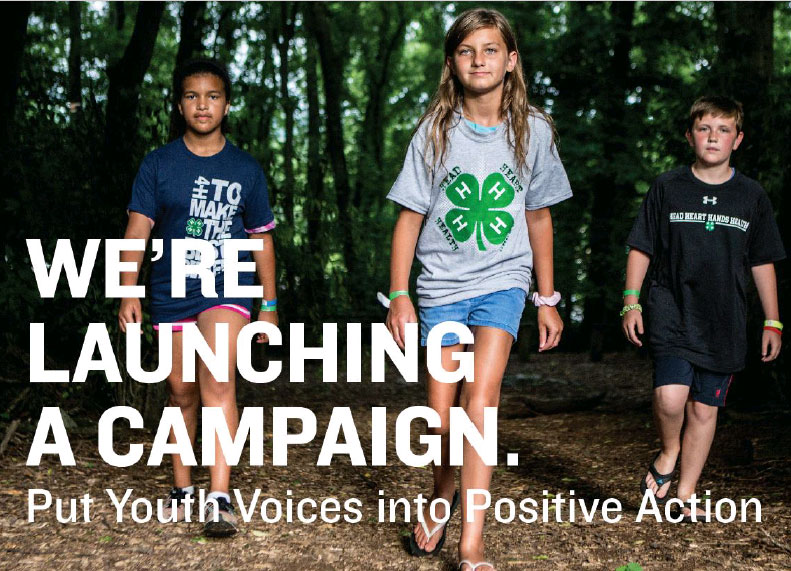 In the Spring of 2016, Goodwill Communications was selected to distribute a national TV and radio PSA campaign on behalf of the National 4‑H Council, which is the non-profit partner of the National Institute of Food and Agriculture (NIFA) within the U.S. Department of Agriculture (USDA).

4‑H programs are implemented by the nation’s 100+ land-grant colleges and universities and the Cooperative Extension System through 3,000 local offices across the country. Its mission is to build stronger 4‑H programs and distribute national financial support to benefit the nation’s youth.

The campaign objective was to reinforce 4-H’s relevance as a leading authority on young people and empower youth with the skills to lead in their lives and in their communities.

To reach its objective, 4-H tapped into the power of its vast network of 25 million alumni, 600,000 staff and volunteers, corporate partners and influencers to spotlight the power of youth and engage America to help 4-H grow more true leaders.

In spite of its lofty goals, there were some serious social impediments working against 4-H including: 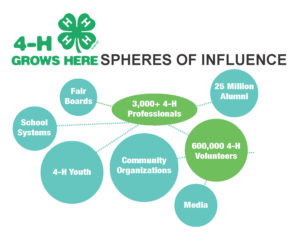 The Grow True Leaders campaign launched in April 2016 with the goal of preparing 10 million True Leaders by 2025.

As we indicated in the other youth campaigns we have worked on, young people do not become leaders in a void; they are influenced by many adults, including parents, teachers, guidance counselors and mentors and community organizations. When it came to implementing this campaign, 4-H pulled out all the stops in terms of adult engagement. 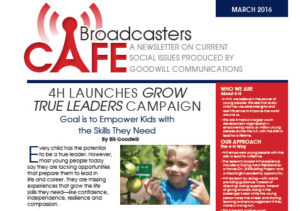 From the PSA perspective, this was one of the last campaigns we distributed using hard copy video tape packages, versus the digital distribution procedures that we adopted just after this campaign was launched.

Over 1,200 hard copy packages were disseminated to individual broadcast stations and networks, along with our Broadcasters Café newsletter that included a feature story on the Grow True Leaders campaign. 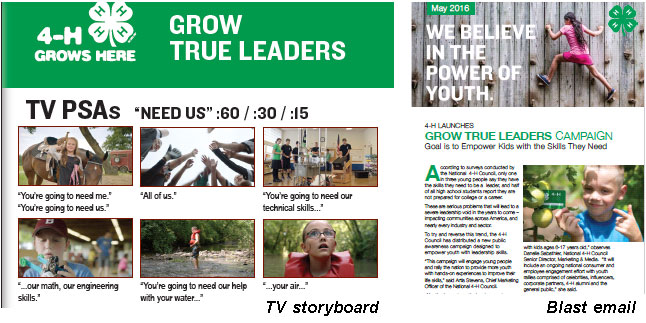 The TV PSA packages sent out to stations also included a 4-color storyboard with key visual scenes from the PSAs. As with all our TV PSA campaigns, our outreach specialist personally contacted nearly 200 national TV networks to pitch the PSAs to them.

We also posted the TV PSAs to both our PSA Digital download site, as well as the National Association of Broadcasters’ Spot Center download site, and sent a blast email to all TV media to let them know where the PSAs could be viewed and downloaded. The download site for the 4-H TV and radio files is at: https://portal.goodwillcommunications.com/PsaCampaigns.aspx?clid=77. 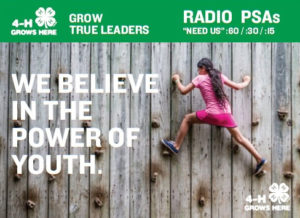 Radio was an important component in the 4-H campaign, because unlike TV audiences which skew much older, radio has several program formats catering to young people.

Our radio package was comprised of CDs contained in a colorful package along with a background description of the campaign and a business reply card for stations to record PSA usage.

The campaign was used on 784 TV and radio station generating 167,103 airplays and $23.8 million in verified ad value.