DAV is a nonprofit charity that provides a lifetime of support for veterans of all generations and their families, helping more than 1 million veterans in positive, life-changing ways each year. Annually DAV provides more than 600,000 rides for veterans attending medical appointments and assists veterans with over 200,000 benefit claims. In 2018, DAV helped attain more than $20 billion in earned benefits for veterans, their families and survivors at no cost to them.

DAV is also a leader in connecting veterans with meaningful employment, hosting job fairs and providing resources to ensure they have the opportunity to participate in the American Dream their sacrifices have made possible.

With nearly 1,300 chapters and more than one million members across the country, DAV empowers our nation’s heroes and their families by helping to provide the resources they need and ensuring our nation keeps the promises made to them. 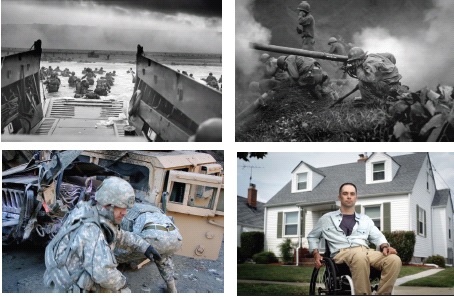 The underlying theme for DAV’s PSA campaigns is that America made a promise to every one of our veterans. We promised them that they would have the opportunity to succeed in civilian life when their tour of duty ended. They were promised a range of healthcare, disability and financial benefits. Yet, far too many of them have to fight for, or don’t know how to access their benefits.

Goodwill Communications began working with DAV and its agency, Crosby Marketing Communications, in 2014 on a campaign titled: Fulfilling Our Promises. The TV creative approach used dramatic footage from the D-Day invasion at Normandy, Korea, Vietnam and Iraq, ending up with a disabled vet in civilian clothes, whose life has been forever changed due to his injuries.

As we do with all our campaigns, we aggressively promote DAV campaigns by:

Distribution
Using our standard distribution plan for broadcast outlets, the DAV TV and radio PSAs are sent to nearly 10,000 TV and radio stations using a “push” and “pull” strategy.

We push the PSAs out using Extreme Reach, the premier platform for distributing digital program assets to broadcast outlets, and we pull media outlets to our PSA Digital site, where stations can download broadcast quality PSAS in their preferred format.

Outdoor Media
In 2015, a new component was added to the campaign – placement of out-of-home posters. We placed hundreds of DAV posters in in major urban markets, including transit (bus and subway) posters, airports, retail locations, highways, and transit stops.

These included posters at Atlanta Hartsfield’s airport, the busiest in the world, with 91 million annual passengers and a welcome poster at LAX airport serving more than 87 million passengers annually, making it the second busiest airport in the U.S. Of these posters, 1,130 were in the top 25 markets, and 1,411 in the top 100 markets with 86% of the U.S. population

Included in these impressive results was a digital billboard measuring 24’x 35’ towering over Times Square in the heart of Manhattan where 400,000 people traverse every day and are worth $125,000 in value.

The DAV case is perhaps the best example of how PSAs can be used to reach a variety of different audiences in different venues to reach a specific campaign goal: demonstrating that DAV cares about our veterans and helps them get the benefits they deserve.