HOW PSAS CAN GENERATE RESPONSE

Harmony was a national public service campaign with a call-to-action to improve the quality of the environment, mostly through sustainable soil cultivation and preservation practices based largely by native American Indians.

A team of USDA public affairs specialists collaborated with the Blackfeet, Salish and Kootenai Tribes in Montana to initiate and create the Harmony campaign. The campaign included TV, radio and print PSAs that promoted SCS’s 1-800-THE-SOIL toll-free telephone line. Callers received an action packet that included a series of conservation tip cards featuring activities to improve the environment, a four-color poster, a Native American coloring book, a bumper sticker, volunteer recruitment information, and an evaluation card of the packet materials. 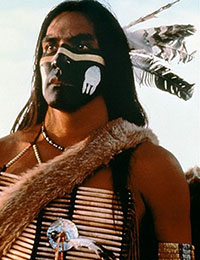 The Harmony theme drew on the response to the movie Dances With Wolves, which showed that Americans are interested in Native American cultures and how those cultures lived in “harmony’ with the environment. Dances With Wolves co-star, Rodney A. Grant, served as the spokesperson for the campaign. In the PSAs, Grant urged all Americans to “share the heritage of taking care of our Earth” and to call 1-800-THE-SOIL for an action packet.

Five methods were used to measure the success of Harmony:

Stations donated in excess of $3.5 million of airtime to the campaign and PSAs were used in every state, reaching reached a potential audience of more than 200 million in Gross Impressions Print PSAs appeared in the New Yorker, Western Horseman. Agri-Marketing, MacWorld and Kiwanis and hundreds of daily and weekly newspapers.

The campaign generated more than 30,000 toll-free calls, and many callers reported taking a specific action to improve the environment.

During the first three months of the Harmony campaign, the number of volunteers increased by 36 percent compared with the same period a year earlier and a 30 percent increase was recorded in the second quarter.

The action packet included conservation tip cards featuring “hands-on” activities for improving the environment, a four-color poster, a Native American coloring book, a bumper sticker, and volunteer recruitment information. A postage-paid card was also included for callers to evaluate the materials in the packet.

At a recruitment fair in Utah, the campaign materials drew several hundred Native American high school students to a recruitment booth. Similar actions have occurred in several other states.

The Blackfeet Tribal Council passed a resolution supporting the filming of the TV PSAs on their reservation. Tribal members reconstructed a culturally authentic Indian camp for the filming, and a tribal council member volunteered as the language coach for Rodney A. Grant, who spoke in the Blackfeet’s native language.

The college also created the Harmony coloring book, and shared it with Salish and Kootenai cultural committees on the reservation. Members of each committee were so enthusiastic about the project that they volunteered to interpret the drawings in the color book in the Salish and Kootenai languages. Not only does the color book help all Americans understand the diversity among Indian cultures, but the committees are using the book as a language instruction tool for youth on the reservation.

Measuring the benefits of instilling an improved environmental ethic is more difficult to assess.
Based on the overwhelming response from public service directors and the target audience, it is reasonable to conclude that a significant number of Americans are better informed to prevent natural resource degradation and are ready to volunteer their help to resource professionals in their communities.

Soil and water stewardship, once considered to be the responsibility of the farming and ranching community, is now seen as everyone’s responsibility, thanks in part to this campaign. Capitalizing on the public’s interest in the environment, a creative (non-traditional) treatment, a clear-cut action-oriented message, and local follow-up to distribution, were paramount to the success of Harmony.

To fulfill this mandate, the NIA produced and distributed a PSA to promote its elderly exercise guide. The centerpiece of the campaign was John Glenn, America’s first astronaut to orbit the earth. 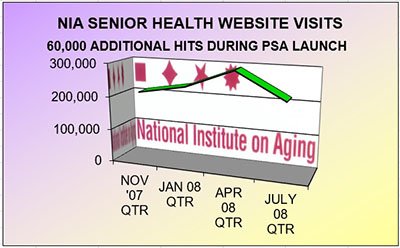 After serving 24 years in the Senate, Glenn lifted off for a second space flight on October 29, 1998, on Space Shuttle Discovery to study the effects of space flight on the elderly. At age 77, Glenn became the oldest person ever to go into space.

At the end of the TV spot, the public was encouraged to write for the free Exercise Guide.

TV PSAs were the primary method for promoting the Guide, and the campaign generated 60,00 additional visits to the NIA website during the campaign, as well 35,000 phone calls to a dedicated 800 telephone line resulting in over 300,000 orders for the Guide.

One of the most definitive studies showing the impact of a toll-free number used in TV PSAs was done by the National Cancer Institute (NCI), which measured calls to its Cancer Information Service. NCI distributes public information via a number of different media and was trying to determine the impact of TV PSAs in general and the affect they had on phone calls to its toll-free number. 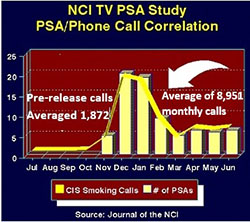 In the months prior to the release of the TV PSA, phone calls averaged 1,872 per month as shown by the flat yellow line for July-November. After the TV PSAs were distributed, over 71,613 calls were logged during the eight-month test period, or an average of 8,951 calls per month. Also, as the graph shows, there was a direct correlation between calls and level of PSA activity.

By using a dedicated 800 line and tagging your PSAs with the phone number or a website URL that is specifically set up to track “hits” resulting from your campaign, you can get excellent feedback on PSA effectiveness, as well as demographic data on typical responders. Or, you can ask for people to write for specific pieces of literature that have been prepared exclusively for use with your PSA campaign and track the number of requests you receive.