Stand Up and Stand Out With PSAs

Home/Miscellaneous/Stand Up and Stand Out With PSAs
Previous Next

Stand Up and Stand Out With PSAs

When you cut through all of the broadcasting jargon and technology, all you really have left is one person talking to another. If that person — your audience — perceives you as just another vendor of entertainment and information, you will be received in just that way — as a vendor.

If however, you are seen as somebody working hard to make people’s downtown safe, protect their kid from drugs and alcohol and lead their community to invest more in itself arid its improvements, they will treat you not as a vendor but as a friend and ally.

Pretty basic stuff. And the television stations that have historically taken on this basic role of friend and ally — the WCVB’s, WBZ’s, WCCO’s, KING’s — have found that this approach pays dividends in very potent ways. They can count on audience loyalties when the network goes through its periodic slump or the prize anchorman is lured away by the competition: they have discovered that their audience stays with the station that cares.

Willis Dun of Audience Research and Development in Dallas reached a similar conclusion concerning viewer motivation for watching local TV news “In researching hundreds of reasons that viewers use to select a focal newscast as their favorite, we have found that the station which is perceived to be most involved in contributing to and caring for its community is almost always number one in news ratings or on the way to that position.

In helping create and mount public affairs campaigns we have found that in addition to gaining viewer loyalty, this approach also provides:

So why doesn’t everybody do it? Well most stations are doing it. With broadcast deregulation, it has become much less cumbersome to give project underwriters on-air exposure.

The reason, however, that even more stations don’t get involved is that the process looks much too foreboding. And indeed, in a way, it can be. The best projects deal with major social issues. If you are really trying to intervene in these issues in a measurable way (as we think is vital), you can’t just find a problem and “go for it.” You must do your homework and actually get involved in the fabric of the issue.

Research and Intervention
The approach we recommend is that the station first isolate a critical ongoing community issue. Something serious and substantive — as opposed to fluffy and feel good — like prejudice reduction, infant mortality or crime prevention. The bigger the problem, the bigger the impact. Then research it. Figure out if there is some way to intervene in it. Remember that you can’t expect in create a final solution; instead, you chip away at the problem. It’s like shaving: You get points for just staying even.

If you can’t measure what you did when it’s all through, then you probably created a promotion. There’s nothing wrong with promotions, but good deeds should write their own press releases. All our projects have serious outside evaluations attached to them, so we know when all is said and done what worked and what didn’t. The accolades come from the results.

The hardest part is designing an effective intervention — a way to really reduce the problem rather than just talk about it. The creating of this “magic bullet” takes research creativity and persistence. 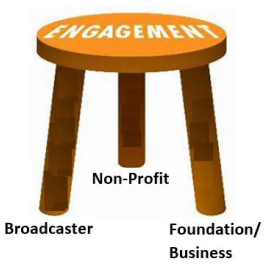 Once the intervention is crafted, the next challenge is to put together the pieces. One method is similar to a three-legged stool. The first leg of the stool, the broadcaster, is where all the magic resides. It is a rare manager that doesn’t intuitively see the value of harnessing normally low-productive PSA and community time to assist his or her audience and position the station.

Over and above PSA time, we suggest to a station that it is in its best interest to consider involving its news, programming, community affairs and promotion departments heavily in the campaign. In essence, the broadcaster becomes the “marketing arm” for the campaign.

But who does the heavy lifting? Who provides that measurable and ongoing intervention? This is the second leg of the stool. Usually it is a major nonprofit institution such as the Anti-Defamation League or the United Way with all the credibility and experience necessary to get the job done. It is also its mission to deal with the particular problem, and it would all but “kill” to get the kind of airtime that the broadcaster is now willing to voluntarily provide. The nonprofit essentially- becomes the “manufacturing arm” of the campaign.

Who pays for the project? Usually not the broadcaster; he has given the air time and packaging. Nor the nonprofit. It usually lacks the dollars to begin with. That brings you to the third leg of the stool. Depending on the issue, sometimes it is a foundation, sometimes government, more often than not, a major business in a community The business can gain guaranteed institutional exposure from the broadcast partner and help its community at the same time. It is completely a win-win situation for all. Ultimately, it’s the public who benefits the most. It wins because it gets a free measurable service to help improve its lives and communities.

What differentiates this approach from the way broadcasters normally do business is that when all is said and done, they are seen, and correctly so, as people helping people. When you take out all the GRP’s. C-P-M’s and uplinks and downlinks, that’s really all you have left, and when it comes to gaining continued viewer loyalty, it’s really all you need.

Jerry is the founder of the Wishnow Group lnc., Marblehead, MA., and authored the book The Activist: How to Create Measurable Public Affairs Projects