Despite widespread criticism, public health PSAs can be effective if you maximize your efforts by taking a systematic, evaluative approach to programs

Public service television announcements (PSAs) have become part of America’s mass media lore. Late-night TV watchers have seen hundreds of PSAs for virtually every illness imaginable, often with appeals based on guilt (e.g., the crippled-child visual) or fear (“20 million Americans have this disease, and it usually strikes without warning.”).

One of the more negative descriptions of PSAs was offered a few years ago by the director of community affairs for a major TV station in Boston. “My image of PSAs,” he said, “is seven dull doctors discussing kidneys at 6 A.M.”

Aside from predictability and dullness, other criticisms of health PSAs have been leveled at their producers. Stephen J. Weber of Market Facts, Inc., believes that many creators of PSAs do not understand their potential. In his book, “Government Marketing Through Public Service Advertising” (Praeger Publishers), Mr. Weber describes some PSA producers as “naively optimistic”: They cite statistics about the millions of TV watchers per day, extrapolate from this the “awesome might of advertising,” and assume this power extends to PSAs. He characterizes other producers as “naive pessimists” who consider unpaid advertising a complete waste of effort.

Public relations and advertising people largely involved in promoting commercial goods and services, also have been criticized for their handling of PSAs. These campaigners for toothpaste, cosmetics, automobiles and other products sometimes take a simplistic view of health and social issues communication.

While they might carefully research and plan each step of a commercial program, they may toss off PSA creation and production with little understanding or attention to the complex issues involved. 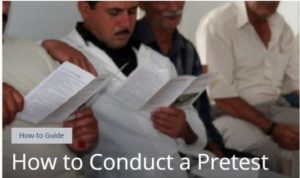 Despite the criticisms, mass media campaigns can be important sources of information on public health. The challenge is to maximize your communications by taking a systematic evaluative approach to public service programs.

Such message pretesting (also known as copy testing) is a common practice among public relations firms and advertising agencies when promoting commercial goods and services. Health agencies and organizations, recognizing the need to measure effectiveness of their communication, have made great strides in applying commercial copy testing methods to health messages. The National Cancer Institute’s Office of Cancer Communications and the Health Education branch of the National Heart Lung, and Blood Institute assembled a working group of health communication researchers, health education planners, and marketing researchers to develop a standardized system or.

At the initial meeting, the Health Message Testing Service (HMTS ) began to take shape. The working group identified two key objectives: to help message producers improve the quality of health PSAs prior to final production; and to isolate those characteristics of health PSAs that contribute to more effective communication.

The Service determined that health message testing should be: open-ended (to allow for respondent probing); able to recruit from specific target audiences; based on natural (at home) or “reasonably” forced exposure to the messages; capable of ingredient analysis (e.g., a character or the music can be isolated and examined); valid and reliable; reproducible; affordable; and timely. 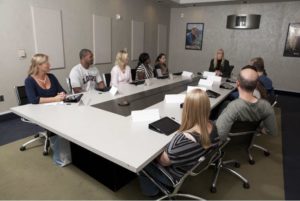 In addition to these criteria, the working group considered it important for the testing approach to accommodate prefinished messages in line with the objective to improve the message before the expense and effort of final production.

Members of the working group debated test methods. Some wanted to develop new methodology tailored to the specific needs of health communication; others opted for a commercial testing service, with minor adaptations it could accommodate health PSAs. This argument finally was settled by budget. An existing commercial system, modified for health spots, proved to be far more affordable than the creation of an entirely new service.

After an extensive search, a research supplier, McCollum/Spielman & Company of Great Neck, NY, was chosen to collect data on TV and radio PSAs, and provide field services for the Health Message Testing Service. The technique used is forced exposure of l00 respondents with 100 from each of four geographically representative cities.

Respondents are invited to attend a session to evaluate new TV and radio programs. They are not told that they will be asked to assess commercials and public service announcements, Respondents are grouped around four TV monitors. All interviewing is prerecorded to avoid interviewer bias.

Both commercials for goods and services and health PSAs are tested, along with control messages that are kept constant from test to test. The messages are shown between variety programs, and respondents are exposed to each message twice. The first program consists of four variety acts, these are interrupted by a “station break” in which seven commercials are played in sequence. This “clutter” sequence lasts three- and-a-half to seven minutes, depending on message length (30-second and 60-second messages are tested), and simulates a normal on-air station break. Only one health PSA is tested in a session. It’s felt that mixing the health spot in with consumer-oriented commercials helps to create a reasonably typical viewing climate.

To maintain the illusion that the programming is the area of interest, respondents are asked a series of questions about the variety programs. Then recall of the commercials and PSAs is measured by two methods. The first method is to assess message attention. Respondents are asked to name, aided, all the messages they can remember. Second, respondents are asked to write down the main idea each message was trying to communicate. These two recall measures are taken about 30 minutes after respondents first see the test messages.

Following this sequence, the test messages are ” shown again, this time within a situation comedy.

Unlike the earlier “clutter” format of the station break, the messages appear one at a time, separated by about six minutes of program content. Then another battery of questions is administered. This round of questions is designed to yield diagnostic information about the respondents’ perceptions of the health PSA.

Reactions are probed concerning message believability, personal relevance, personal likes/dislikes, and elements of the message. Three measures are standard in HMTS test’s: attention, main idea communication and believability. These measures are then compared with the normative data for all health PSA test’s that have been collected over the years.

Since its inception, the service has tested 63 TV and l9 radio PSAs on health. Also, HMTS has developed a test for print PSAs used for health pamphlets, flyers and posters. As with television, the radio and print tests use standard pretesting techniques to assess attention, main idea communication, and believability.

HMTS has been particularly successful in meeting its objective of improving PSA communication before final production and distribution, For example, test results of a PSA promoting sensible weight loss suggested that the female presenter lacked credibility. About half of the respondents questioned her as a source of weight-control information, since they found it hard to believe she had ever been overweight.

In another case, two prefinished PSAs on jogging for fitness stemmed from the same communication strategy and contained similar information. Test findings indicated that the message based on a testimonial approach (people talking directly to the camera about personal exercise experience) communicated better than the other PSA, which employed a special-effects montage of jogging images with narration.

Elements of The Effective Message

HMTS’s goal is not to devise a rigid formula for message development, since that could stifle creativity and lead to a dull sameness that might actually reduce message impact. Rather, the point is to create a general understanding of what elements of the PSA have the most potential for gaining attention, fostering recall and engendering believability.

Study findings disclosed a series of characteristics that resulted in higher message attention: fewer characters (fewer than the average of three per PSA); audio repetition of the message subject (four times among the higher scoring spots); repetition of an audio slogan; implied social benefits of the health behavior; and a straightforward message appeal.

Finally, the study results indicate that an emotional appeal correlates with higher message believability. The top five messages (in terms of believability) that were analyzed used either a high or moderate emotional appeal. Examples include a New York State PSA on mental retardation that urged the public to accept the retarded into their neighborhoods, and a message on the importance of breast feeding to babies’ health.

Another variable found to be associated with believability is live-action production (as compared with animated, illustrations/sketches, still photos and other techniques). HMTS is designed to test health PSAs prior to final (live action) production, often using still photos with camera movement or some other simulation of live action.

Producers of health PSAs should realize that their messages may be more believable when finally produced with live action, but they should not use expensive live-action production techniques in pretesting simply to achieve higher scores.

Copy testing is the subject of continuing and often heated debate in advertising and public relations circles. Critics of copy research point out that recall is only a partial measure of persuasion, that prefinished mood and image commercials are difficult to test and their effects hard to quantify, and that current test methods often lack the sensitivity to discriminate between similar executions of the same strategy.

Underlying these and other criticisms is the fear that testing will be used as a substitute for judgment and that testing can lead to dull monotonous advertising.

This study is meant to extend the debate into the realm of health PSAs. Clearly, test data and generalizations based on these data must not be slavishly followed, but should be tempered by good communication judgment, based on experience and a thorough understanding of health communication as well as the targeted audiences.

However, it is also important to note that message pretesting can make a significant contribution to the health communication process by providing creative guidance, encouragement and stimulation, and by saving considerable time and money.

Bill Novelli was a professor in the McDonough School of Business at Georgetown University and created the Global Social Enterprise Initiative at the School. He co- founded and was President of Porter Novelli, now one of the world’s largest public relations agencies. He was also CEO of AARP, a membership organization of over 40 million seniors. Prior to Prior to AARP, he was President of the Campaign for Tobacco- Free Kids, and Executive Vice President of CARE, the world’s largest private relief and development organizations.