A few years ago, Smokey the Bear turned 70. Since the life expectancy of your average bear is only 22 ½ years, we can be pretty sure that’s he’s alive only in the continuing series of public service ads (PSAs) that have featured him since the 1950s. Because he’s certainly not alive in what the nation’s best PSA advertising has since “morphed” into… what we now call “Social Marketing.”

What is Social Marketing, Anyway?

Sure, maybe you’ve heard the term. It’s even become fashionable in some marketing circles. But what exactly is it? And why should agencies and non-profits care?

To begin with, social marketing is not the PSAs of yesteryears, it’s not just healthcare advertising, or even the marketing of social causes. It’s not “Smokey the Bear,” “Take A Bite Out Of Crime,” or “Just Say No.”

According to the earliest academic origins of social marketing during the early 1970s, social marketing is: “…the design, implementation and control of programs calculated to influence the acceptability of social ideas…” Many others since have referred to it as simply the “selling of ideas, ” or concepts, as opposed to the more traditional selling of products and services.

We believe advertising agencies working in (or looking at) this growing field need to consider a slightly different, and possibly more actionable definition that looks something like this: “Social marketing is a research-based process that adapts proven marketing tactics to raise awareness, change attitudes, beliefs and in the end, social behaviors.”

By the Way, Does This Stuff Work?
On numerous occasions, with a wide range on differing issues in the U.S. and abroad, social marketing has been statistically and quantitatively proven to work. Just take a look at these few examples:

Isn’t This What Ad Agencies already Do?

Many social marketing campaigns are trying to change long held, deep-seeded behaviors (e.g. our campaign for child abuse prevention and positive parenting), with complex motivations and amazingly strong psychological barriers that must be overcome to be successful.

“Brand loyal” takes on a whole new meaning in the social marketing arena and requires us to probe much deeper and into more difficult psychological areas, to understand these motivations and barriers. It also often requires a direct and almost “raw” appeal to the emotions to start to break down these barriers.

It may be personal, family, community, societal or even global good, but the “transaction” that we are hoping will happen in social marketing differs quite a bit. And finding a beneficial exchange can be the most difficult challenge in developing social marketing campaigns (e.g., “C’mon, no one gets hurt when I smoke marijuana! Why should I stop?”)

The research needed to develop a successful social marketing campaign differs as well. Building on the scores of academic papers and theories from virtually all of the social science disciplines that are readily available, social marketers look to go beyond traditional qualitative research.

It is important to incorporate experimental psychological and anthropological concepts into our research to better understand our audience, their hopes, dreams, fears and other emotions regarding the issues. This helps us go beyond the socially acceptable answers to socially unacceptable behaviors, and allows us to tap into more basic, genuine and emotionally-motivating truths in the social marketing campaigns we create. 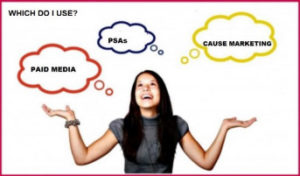 With a truly integrated social marketing campaign, choices must be made on how best to reach the audience with which marketing tool. Sure, we all ask ourselves “Is TV the most efficient and effective way to reach young teen jeans buyers?” but the marketing mix can be even broader in social marketing. Advertising or PR? PR or community programs?

Maybe a radio DJ outreach effort would be most effective, or maybe a program for beauty salons? Maybe daytime TV spots during soap operas, or decals on mirrors in public restrooms? (Yes, really.) Maybe book covers for school text books? Or maybe we should just train people one-on-one in the socially acceptable behaviors we desire? By the way, we’ve used them all, at one time or another. The choices are just broader and often times, tougher to make than in general marketing campaigns.

Some of other less common, but equally important differences between social marketing and general marketing are: the need for a much broader consensus among numerous “stakeholders” (imagine your toughest client approval process and triple it); the frequent need (or desire) for community, as well as organizational buy-in; and even a heightened sensitivity and response to low literacy levels, in some cases

Why Should Ad Agencies Care?

In case you haven’t noticed, the playing field in social marketing has changed. It has become much more interesting for agencies and at the same time, much more rewarding, both mentally and financially. Remember, we’re not talking “pro bono” accounts here.

First, social marketing isn’t limited to health issues anymore, although anti-smoking and anti-drug campaigns do still dominate the field. Look at the “get-out-the-vote” campaigns, literacy issues, recycling, ride-share, drunk driving, littering…the list goes on and on. (Just don’t get me started on the “anti-gum chewing” campaign in Singapore). And that doesn’t begin to tally up the potential for applying a social marketing approach to all sorts of other private sector businesses like HMOs, diet programs…even gyms.

Second, Social Marketing is now big business. The various anti-smoking campaigns in states across the country already spend more than $150 million each year, and the federal anti-drug effort will spend another $200 million each year for the next five. And add to that the recent tobacco industry settlement, which could result in another $246 billion in anti-smoking efforts…yes, that’s “billion.” It’s not just happening in the “big” states on “big” issues:” North Carolina recently spent $1 million on their Deadbeat Dads campaign.

Entire agencies have been founded on this social marketing specialty, and many of them are already highly profitable. General marketing agencies who pursue and win social marketing clients are finding they can be a great boost to their client list, their employee morale, their agency’s image, and their bottom line.

Barry Schoenfeld is Partner & Director of Business Development at asher&partners in Los Angeles. His career also includes stints at Y&R and Ayer in New York, and Saatchi & Saatchi and Keye/Donna/Pearlstein in Los Angeles.