Charity, In and of Itself, Doesn’t Pass Muster – Cause Marketers Seek Unprecedented Brand Accountability – Source: Cause and Effects Marketing

Though it isn’t likely to steal share points from Oprah, a national teleconference on breast cancer was a novel combination of corporate philanthropy, government resources, grass-roots organization, and out-and-out brand values strategy. The two-hour exchange, designed and funded by Avon Products, the Centers for Disease Control and Prevention, and the New York State Department of Health, linked some 25,000 physicians, nurses, educators, religious groups and clinical workers with a panel of medical experts to develop cancer screening and outreach programs, particularly for low-income, minority and elderly women.

An ABC News correspondent moderated the commercial free satellite broadcast from PBS station WQED in Pittsburgh, showcasing Avon/CDC programs, a Latina women’s group in Chicago, and a Native American project in Alaska. There was no Avon hard-sell for its cosmetics or jewelry. Still, the event created an environment to connect with customers.

Avon funded half the show’s $600,000 production cost and its reps served as facilitators. It was also banking on heightened brand awareness from media exposure, and by extension, reinforcement that Avon cares about women’s health. 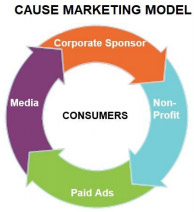 Welcome to cause-related marketing, where practitioners are adopting issues to leverage corporate assets and support brand positioning. Corporate benevolence roots itself in the first stirrings of the industrial era.

The theory behind this approach marries a product or company to a core customer value, deepening relationships and building strong bonds of trust. In a world of parity products, these attributes help differentiate brands from those of rivals.

Self-serving, but cloaked in enough “do-goodism” to win customer approval together with sales, American corporations spent an estimated $1.2 billion on cause-related marketing events in 2015, according to IEG Sponsorship Report.

Starbucks promotes its relationship with CARE at retail stores with $20 sampler packs of exotic coffees, earmarking $2 per bag for company-sponsored efforts to benefit coffee growers in Ethiopia, Guatemala, Kenya and Indonesia. American Express, meanwhile, encourages card usage during its annual fourth quarter Charge Against Hunger, garnering a 10% increase in transactions last year. Nike supports Boys and Girls Clubs and incorporates the programs into its national TV and print ads. “Cause-related marketing is going from art to science and people are trying to find better ways to measure results ” said Frank Bulgarella, president of Resource One, a cause-related consultancy in Ann Arbor, Mich., that has developed programs for Polaroid, Discover Card, Seagram, McDonalds and CocaCola.

Where companies were once satisfied with such quick-hit initiatives as coupon drops and bikea-thons, they’re now seeking longer-term strategic alliances to fight drunk driving, find a cure for AIDS or tackle an environmental need. “In event marketing, people used to say a company sponsored golf because the CEO liked to play. With causes, there are deeper issues” said Bulgarella, a veteran of Special Olympics programs. “The link of the cause is what makes the sale.”

Nabisco’s two-year tie with the World Wildlife Fund has provided extra fuel for its Barnum Animal Crackers, which created a consumer sweepstakes tied to its endangered species series, offering kids a chance to design a future cookie box and a family trip to the San Diego Zoo. “Kids really like animals and want us to take action on a cause that means something to them,” said product manager Lynn Exar.

Those sentiments are underscored in a Cone Communications/Roper study of executive attitudes that found causes gaining ground as instruments of relationship management, whether that means broadening a brand message, reaching potential customers or instilling pride in employees.

Of the 70 firms surveyed, 93% said they engaged in cause-related marketing to build relationships and solidify customer loyalty. Image enhancement, creating a brand platform, and product differentiation also ranked high as motivators. Only 50% cited increasing sales as a major reason for initiating cause-related programs.

“Companies understand that cause marketing is a long-term strategic practice that’s all about brandbuilding,” said agency Carol Cone, who previously coined the term “passion branding” to describe the effect when a company embraces an issue as its “soul” that resonates in everything they do.

The “cause” may in fact become the product itself as seen with Rockport’s walking shoes or GM’s Saturn cars. Both have built entire marketing campaigns around the passionate experiences of satisfied consumers. “They took the traits of the cause relationship and recreated it as an auto company,” said Cone.

But it would be a mistake to think consumers view these efforts as a substitute for solid fundraising programs, especially at a time when government cutbacks and dwindling donations have left gaping holes in funding for many social programs. Moreover, corporations have a leg up on some charitable groups in the wake of high-profile scandals that have hit the United Way of America, and others.

McDonald’s says it doesn’t view RMHC as a driver of burger sales, but 1994’s in-store music promotion featuring CD compilations from Garth Brooks, Tina Turner, Elton John and Roxette generated a 5% sales jump, along with over $9 million in donations. Barun, who is looking forward to a program reprise next year, has been turning down thousands of proposals. “Everyone has a widget they think can be a blowout,” he said. Instead, Barun is more likely to tighten promo links with corporate partners such as AT&T, which donates $1 million a year in free phone service to Ronald McDonald Houses.

“We reached a point where we have a critical mass of learning and are very anxious to share it,” said Joanne Mazurki, Avon’s director of global public affairs, who heads the company’s causerelated marketing efforts. “We didn’t want people spinning their wheels.”

Of course, many causes won’t hit their stride unless they latch onto the right partner. Dan Palotta, founder of the California AIDS Ride, was turned away by more than 200 companies before gin maker Tanqueray jumped aboard with a $550,000 contribution and plaudits from spokes-character Mr. Jenkins on bus shelters, billboards and magazines.

Where more traditional brands balked, Tanqueray saw the rides as a logical fit with its “brilliant possibilities” campaign, from Deutsch, N.Y., that could also help the brand reach younger consumers.

The first long-distance ride drew 478 bicyclists who raised $1.5 million to benefit AIDS-related services at the Los Angeles Gay & Lesbian Community Center. Three years later, the rides have expanded to five states, with 11,000 entrants expected to raise more than $25 million for 28 service organizations. Tanqueray’s ante is up to $3.5 million in donations and marketing support; Banana Republic, POZ magazine, and USAir have also joined in.

“If you treat it like you would any other strategic marketing program, you can get phenomenal results,” said Cone. “If not, consumers say ‘so what,’ and it doesn’t add to brand equity.”