The use of Nielsen Media Research’s SpotTrac monitoring system continues to push TV PSA evaluation to new heights and shatter myths about the placement and shelf life for PSA campaigns. More importantly, it is very reliable compared to self-reporting via bounce-back cards which have been used in the past.

We do not want this article to get too technical and other articles on our site discuss evaluation in greater depth, but we will provide the basics of how the SpotTrac monitoring system works.

When we get a digital TV file from a client, the first thing we do is to send it to our post production house which ensures that the file is broadcast ready. Then they add the Nielsen SpotTrac code to the digital file which will be sent to stations. 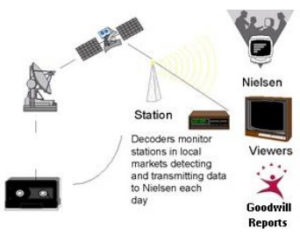 Nielsen has monitoring facilities in all 210 DMAs (Designated Market Areas) around the country which pick up the SpotTrac signal when it has been broadcast over the air. Once a week they send us a raw data file of PSA exposure and our software breaks down the usage data by client and by other parameters that allow us to produce client reports.

This graphic shows the overall process. Goodwill Communications was one of the first PSA distributors to adopt the Nielsen monitoring service and it has made a tremendous difference in PSA campaign values.

In addition to building credibility for PSAs as a mass communications technique, SpotTrac has also helped reverse widespread misperceptions about PSA effectiveness. 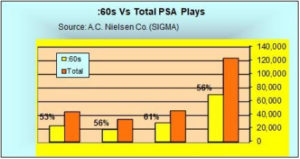 Using bounce-back cards as the evaluation mechanism, many PSA producers believe that PSAs are used in “junk” time from midnight to 6AM, when audience viewing levels are comparatively sparse. However, SpotTrac usage data tells a different story. On average, for the 30 campaigns in our benchmark model, 56% of all PSAs aired during optimum dayparts from 9AM-10PM.

Another misperception held by many producers is the belief that only shorter length spots get aired by stations. Here again, SpotTrac provides contradictory and more accurate data. In those cases where a 60-second PSA was distributed to stations, they received from half to nearly two-thirds of all airplays. 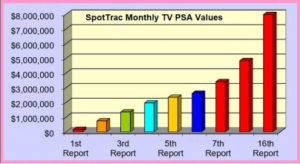 Finally, because very few bounceback cards are returned from stations after a 12 week period, most PSA producers believed the shelf life for a PSA is about three months.

However, the typical SpotTrac tracking cycle is 26 weeks, and in every SpotTrac campaign we have monitored, dollar values and airplays continue to build during longer monitoring periods.

Perhaps the only weakness of the SpotTrac system, which monitors all U.S. broadcast stations seven days a week, 365 days a year, is the lack of monitoring among local cable TV stations. We believe technology will be developed in the future to track local cable, and thus exposure on these outlets is still done via self-reporting and Nielsen now provides monitoring of about 200 national cable networks. 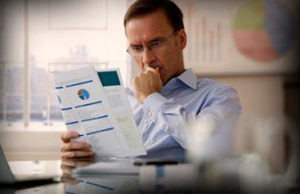 The other monitoring issue is that some stations edit the PSAs sent to them typically adding station promo information typically at the end of the video which can interfere with the Nielsen SpotTrac code. The latest Nielsen monitoring system uses Universal Encoder which can encode up to three levels of identification data and a redundant set of ID data to ensure that a SpotTrac code code will remain if local stations strip off or overwrite the code.

Nielsen also has an electronic tracking system for radio, but presently it monitors only about 20% of the radio universe and is quite expensive given the amount of data that is generated. Over time, we believe that radio and local cable – like broadcast TV – will all be monitored, thus adding significantly greater credibility for public service advertising campaigns.