Marketing Your Message via Radio PSAs

Home/Radio/Marketing Your Message via Radio PSAs
Previous Next

Marketing Your Message via Radio PSAs

Editor’s note: The following article has been updated with newer information since it was originally published in Government Communicator Magazine.

Radio has enjoyed a resurgence in popularity over the past few years. Although no one can pinpoint why more Americans are turning to a low-tech medium in a high-tech era, its portability and its ability to cater to specific program tastes may be two underlying factors for its success.

One thing that contributes to much bigger radio audiences is that it is the medium that often keeps people entertained while commuting. People are spending more time than ever in their cars – daily vehicle trips are up 110% since 1970, and the number of cars on the road is up by 147%. For most people stuck in traffic, the only media options are radio and billboards. 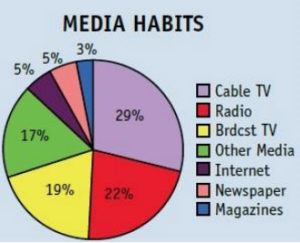 According to the Radio Advertising Bureau, radio reaches more people than any other medium except for cable TV.

Heavy PSA Users
There are more than 11,000 radio stations in the country today. About half of them use public service announcements (PSAs). Before mailing PSAs to stations, however, there are a variety of details to consider when preparing your radio PSA plan: 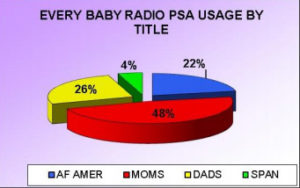 Most radio stations broadcast a variety of different programs during the course of their programming day and if you give them more options in terms of the types of PSA messages you offer, that can greatly increase usage.

For example, if you use adult contemporary or rock music in your background, that is not going to fit very well with a C&W station. For a campaign we distributed for the March of Dimes, they produced four different types of radio PSA messages to fit with various radio program formats. It was the most successful radio PSA we ever distributed. An alternative is to provide generic musical backgrounds in your PSAs which allows program directors to use them at any time and with any program formats.

Lengths
As with all PSAs, you should provide a minimum of 3 spot lengths for radio – a :15, a :30 and a :60, as the availability of time is completely random and if a :15 spot opens up but you do not have that length in your package, you lose. The capacity of a CDR is 70 minutes, yet PSAs typically only fill about three minutes of this capacity. Accordingly, think of other types of audio programming you can put on the CD such as two-minute Audio News Releases (ANRs) on various subjects your audiences may be interested in hearing.

Developing the Distribution Plan
The number of stations to target is influenced by many factors, including budget, demographic considerations and previous usage practices of the station. Our typical distribution plan is 3,500 stations, which includes all previous users and provides uniform coverage across markets and program formats. However, the true reach of this plan is about 6,000 stations, due to the fact that many stations own more than one station, but only want one CD PSA package.

Unlike television, which is a general interest medium, radio programming is aimed at listeners with particular interests, making it easy to segment stations by ethnicity, age, educational level and lifestyle.

The list below includes the major radio program formats and the approximate number of stations in each format: 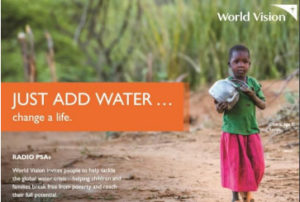 CDs are the standard format for distributing radio PSAs, but it is very important to send packages in a format that will meet the U.S. Postal Service automated handling equipment, such as the one shown here which is called the Flex Mailer package.

This packaging concept has several components: the Flex Mailer cover, the CD with a four-color label; facts on the issue which can be printed on the inside left-hand panel, and an evaluation business reply card.

Tracking/Evaluation
Until a few years ago, the only way radio usage could be tracked was via business reply cards (BRCs), which have some limitations, in that many stations simply do not take the time to complete and return them. The Nielsen Company, noted for its media audience data and ability to track TV PSAs, now has a service to track radio PSAs on about 1,200 stations (about 10 percent of the universe).

Radio PSA Reporting
For most radio PSA campaigns, you can expect an unaided response rate of about 15 percent, meaning that 525 stations will use your PSA when 3,500 are targeted. Given an average dollar value of $1,350 per station, a typical radio PSA will generate in excess of $700,000 in airtime value.

The Take-Away
Radio PSAs can be one of the most cost-effective mass communications techniques available to get your message out to both general audiences and discrete populations. They offer message flexibility, and they permit you to reach audiences both in and outof-home. They are comparatively inexpensive to produce, and they provide a good return on investment IF you package and distribute them properly.