With more than 500,000 premature infants born each year in our country – or one out of 8 new births – this major medical problem is having a serious impact upon our health care delivery system. It adversely affects the parents of the newborn, employers who often shoulder much of the cost, and on society as a whole. With a cost differential of nearly $40,000 per birth between full term babies and those born prematurely, the cost to society is just over $26 billion annually.

The March of Dimes has been a leader in the fight to address premature births by launching a multi-year, multimillion-dollar national campaign to help the nation reduce the rate of premature births from 12.1 percent to no more than 7.6 percent. Specifically, they have been:

Why Radio?
Radio was the perfect medium for us to use in this campaign for several reasons:

To make our radio spots resonate with busy audiences, we had personal stories from moms, dads, African American and Hispanic parents. Each of these spots told poignant stories about how premature births affected their families and the help they received from March of Dimes. To provide radio stations with optimum scheduling flexibility, we also produced the PSAs in three different lengths – :60/:30 and :15s.

Engaging both our chapters and allied organizations was an important objective for the campaign. As a “chapter-centric” organization, March of Dimes always tries to engage its chapters in national programs because they are out there in the communities where the real work gets done. To achieve this purpose, Goodwill Communications created a custom website with various features to engage our chapters in several ways. The site:

In a few words, we provided our chapters with all the tools they needed to get engaged in the national campaign and bring about change at the local level – a key to any successful national education effort.

Another important promotional element that led to the success of the campaign was co-branding by Clear Channel Communications, one of the largest radio chains in the country, with over 1,000 local radio stations under their umbrella. 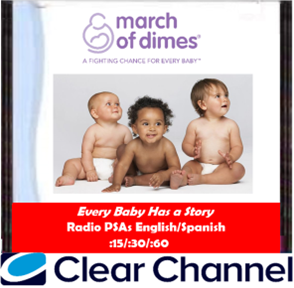 We approached them to become our campaign partner, and once they agreed, we added their logo to our radio PSA collateral materials. We designed radio packages going to Clear Channel stations with their logo and this provided a strong endorsement of our message. All other stations got packaging without the Clear Channel logo. Additionally, we had CDs made which were distributed at the NAB Radio Show.

Since we had very specific audiences for this campaign, the stations which reached African Americans, Hispanics and parents in general were targeted, along with those stations that were the heavy users of PSAs from previous campaigns. We took special steps to make sure the PSAs could be played on any type of equipment as well. 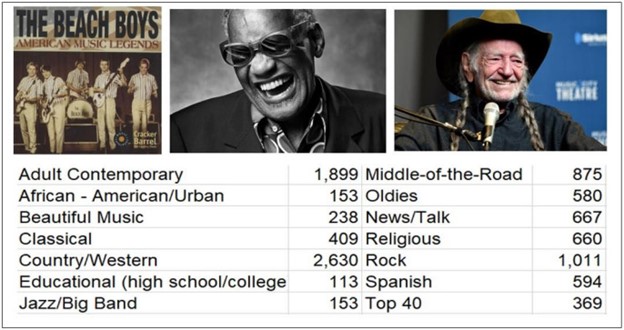 While .MP3 files work for most stations, there are still some smaller market stations which use CD-audio to record PSAs onto broadcast carts, and then play those cartridge tapes on the air.

To permit them to use the PSAs as well, we provided “Enhanced CDs,” containing the CD-Audio tracks, along with CD-ROM/MP3 files, which are in a user-friendly format. The good news is that it doesn’t cost any more to provide both types of files to stations.

Obviously it is important to know what has worked and where more efforts are needed in any project, but in the case of our Prematurity radio campaign, we took evaluation to a new level. In the past there was no way to track radio PSAs other than by “bounce-back” cards which do not always provide complete and accurate data.

However, Goodwill Communications retained a company to monitor our radio PSA usage among 2,700 radio stations in major markets around the country. This monitoring, when added to our bounce-back cards, provided significantly greater usage feedback than we normally could obtain.
Our online reports also included key trends graphs so we could see where our PSAs were getting exposure by market size. This in turn shows how well our PSAs are reaching population centers.

Another graph showed usage by the various radio program formats to see how well we reached our primary target audiences. We also compared the MOD radio PSA campaign to other successful radio PSAs. 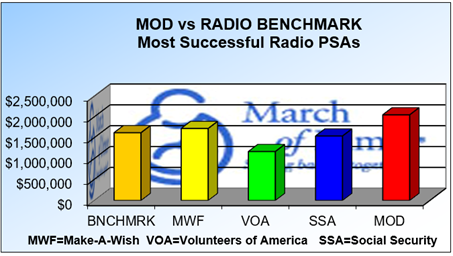 As shown by this graph, the MOD radio PSA generated more exposure than any other campaign Goodwill has distributed, surpassing the next most successful effort by 21%.

Suzanne Cale Young held various positions with March of Dimes for 24 years, the last of which was National Director of Strategic Media Partnerships