When we prepare cost estimates for PSA distribution – TV in particular – there is a line item listed as “Promotion,” and then a description of the tactics we use to promote our client campaigns. While it is a modest cost in the total scheme of things, clients typically ask “why do I need to do these things – what does promotion do for my campaign?”

There are at least three reasons for campaign promotion, and especially broadcast TV, which typically accounts for 70-80% of all PSA values and exposure.

Now that all TV PSAs are distributed to stations and networks via digital platforms, it is absolutely necessary to inform the media about where PSAs can be downloaded.  One of the first steps when distributing a new campaign is to post the client digital files on three different platforms as shown by the logos above.

It is natural to think that the issue we are working on is the most important one in the world.  However, if you were a public service director for a major TV station, your issue is just one of the hundreds they deal with in any given month. The typical profile of a major market TV station is a young woman, working in a one-person department, who is over worked and under paid. In addition to dealing with hundreds of requests for PSA airtime, she has other station duties, and is inundated with calls from all over the country begging for airtime.  And oh, did I mention that she works in a non-revenue producing department, which means management does not give her nearly the resources she needs to do her job well?

There are a variety of ways to inform, educate and engage the media in your issue, but given space limitations, we cannot address them all. 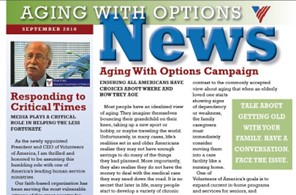 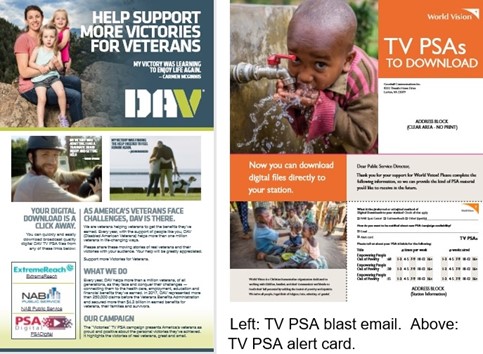 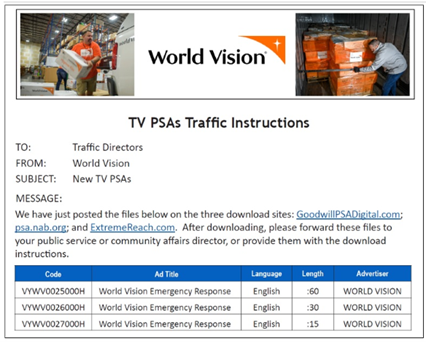 One of the most effective is to do a newsletter which tells the media why your issue is important, and why it deserves their consideration.  We also send public service directors blast emails and hard copy alert cards direct mailers such as shown above. Since the public service director at stations may not be the one who receives digital files, we also send Traffic Instructions which provides the detail stations need to get PSAs on the air.

Since the media is donating free time and space to nonprofits, it stands to reason the PSA environment is highly competitive with 39% of all TV stations receiving from 8-30+ PSAs monthly.

What this means is that the non-profit that does a better job of marketing and promoting their issue stands a better chance of getting their PSAs used.  Others who do not understand the competition for scarce time, and do nothing to cut through the clutter, are not likely to get scarce airtime.

The first was when TV stations migrated to digital broadcasting.  As part of that technological shift, local TV stations were given up to six sub-channels which could be used to expand their programming.  Many of them use this expanded capacity to air PSAs.

The second trend is the explosion in national cable networks, which have been created to meet very specific audience interests and lifestyles.

When you channel surf, you see TV programming catering to people who love to cook, history buffs, dog lovers, nature enthusiasts and everything in between.  Numerically, the number of national TV networks to which we distribute our client PSAs, has grown to over 200.

We believe that PSA campaign promotion not only pays dividends; it is absolutely mandatory in the era of digital distribution and a highly competitive environment.