Consider the billboard, for so long the working-class grunt in the glittering media universe. When Lady Bird Johnson wanted to beautify America, she launched a campaign against billboards. Ted Turner inherited his father’s billboard company but dumped it after getting into television. When tobacco and liquor advertisers were forced off the airwaves, they took refuge on billboards. 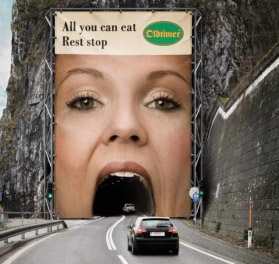 “Pollution on a stick,” the medium’s been called.

Lifelong billboard guys like Arturo “Arte” Moreno and Karl Eller have heard all the wisecracks–but now they’re enjoying the last laugh. As the executives running the nation’s two biggest billboard companies, Outdoor Systems Inc. and Eller Media, they are leading an eye-popping revival of the billboard industry, the oldest and simplest media business around.

Spending on outdoor advertising–which includes bus shelters, subway posters, street furniture, stadium displays, and mall and airport signs as well as traditional billboards–is growing by nearly 10% a year, faster than newspapers, magazines, and broadcast TV, though not as fast as cable or the Internet.

More important, an industry once known for pushing cigarettes, beer, and Burma Shave, and for delivering the most prosaic messages–EAT AT JOE’S, 6 MILES AHEAD–has become hip.

Image-conscious marketers like Gap, Calvin Klein, Apple, and Disney are paying $100,000 a month or more for attention-getting displays in New York’s Times Square and along Sunset Strip in Los Angeles. Even Internet trendsetters like HotBot and Excite rely on billboards to stay visible in the real world.

It’s quite a turnabout for an industry that thrived before television but then was spurned by Madison Avenue. “Outdoor used to be known as the beer, butts, and babes medium,” says Andrea MacDonald, president of MacDonald Media, a New York agency that specializes in out-of-home advertising. Now, she says, “everything’s changed. Other media are fragmenting, new technology has made us more creative, and advertisers are
seeing billboards in a new light.”

Investors who anticipated the billboard renaissance have profited handsomely. The 52-year-old Moreno, who began as a billboard salesman, took Outdoor Systems public with little notice from Wall Street and the stock price has grown by 1,460% since then. Lamar Advertising, the nation’s third-largest billboard firm, went public a few months later; its stock has grown by 335%, easily outpacing the market.

As for Karl Eller, the industry’s 70-year-old senior statesman, he sold his Eller Media firm to radio operator Clear Channel Communications in 1997 for a then-record $1.15 billion. “Since the outdoor companies got access to the capital markets, their values have gone through the roof,” says Tom Vanderslice, an investment banker who specializes in media at CIBC World Markets. Suddenly, billboard companies that had traded at no more than ten times cash flow in private deals were being valued at multiples in the mid-teens by the public markets, setting off a wave of consolidation.

The Big Three of billboards–Outdoor Systems, Eller, and Lamar–have spent more than $5 billion to gobble up dozens of mom-and-pop operators, as well as the outdoor divisions of big companies like Gannett and 3M. Together they control about 40% of the revenues generated by the 400,000 or so billboards across America; as industry giants, they can operate efficiently and provide one-stop shopping to national advertisers.

Like other rising stars of the information age, billboards have gone high tech. Digital technology developed at MIT has transformed the way  billboards are made. Until the 1990s, most billboards were hand-painted on plywood. Quality was inconsistent; worse, when pgh aint faded and wood chipped, billboards became eyesores. 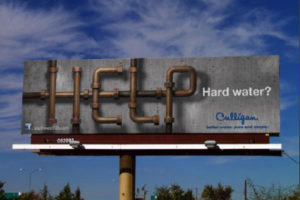 Today, computer-painting technology has all but eliminated the old-fashioned sign painter, and plywood has given way to durable vinyl that can be cut to any size, then rolled into tubes for easy shipping.

Interestingly, Metromedia Technologies, the company that brought computer painting to the market, is owned by billionaire John W. Kluge, who’s been a major force in the billboard business for four decades. Kluge owned Foster & Kleiser, then the nation’s biggest billboard operator, and Metromedia is now the world leader in large-scale imaging. Other innovators are adding three-dimensional structures, digital tickers, and continuous motion to outdoor. 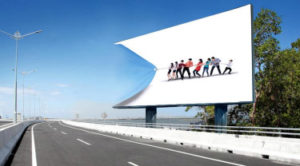 Broad social trends also favor billboards. Americans are spending fewer hours at home, where TV, cable, magazines, newspapers, books, and the Internet all clamor for attention. People are spending more time than ever in their cars–daily vehicle trips are up 110% since 1970, and the number of cars on the road is up by 147%–and for most people the only media options in a traffic jam are radio and billboards. Billboard salesmen like to say that they reach consumers when they’re on their way to spend money at the supermarket or the mall.

A GE Capital-backed company called Media Vehicles plasters billboards on big trucks. Ads can be found on the sides of shopping carts and taxicabs, in the restrooms of hip urban bars and in the air above sports events like the Super Bowl, which this year hired its own airtraffic controller to guide the passing blimps. Remember when the Russians launched a rocket into space with the Sony logo on it? Not even the sky is the limit for the billboards of tomorrow.’