The Four R’s of Broadcasting & Why They Matter

Home/Miscellaneous, Television/The Four R’s of Broadcasting & Why They Matter
Previous Next

The Four R’s of Broadcasting & Why They Matter

Author’s note: Understanding the media mindset is critically important if you are going to send them PSAs and hope they get used. This article tells why the media use PSA messages for which they are not paid, and what the non-profit community can do to help them raise their visibility in the local marketplace.

An executive from a major package goods company called our office recently. It seems he came across one of our evaluation reports that had been prepared for a non-profit, and his company was going to assist with a future PSA campaign.

“With so much competition for media time and space, do the media even use PSAs any more?” he asked. I went on to explain that the media – broadcast TV in particular – do indeed run PSAs – hundreds if not thousands of them in a given year and shared a few of our client successes with him.

Shedding New Light on PSAs
However, his inquiry made me think about the role of PSAs in a new light. We who distribute PSAs have a storehouse of intelligence data about which media use PSAs and the estimated value of that exposure. Speaking specifically about TV, many of the stations that provide the airtime to various non-profit causes, don’t maintain logs or provide affidavits for this exposure. When it comes time for the community affairs department to demonstrate its contribution to their station’s bottom line, they are not able to tell the whole story.

And, this is not a problem among just individual stations. A year or so ago a colleague was discussing evaluation with one of the big three networks. The network executive indicated he did not have any idea of the level of support his network provided to nonprofits but did say that having this information would be very useful in demonstrating the contributions of his department.

It came as a great shock to learn that a major network would not know how much support they had provided for various public interest campaigns, and if the networks don’t know, we can probably assume that most stations don’t know either.

With this premise, it may be useful to explore several topics that could help both station and non-profits increase their stature among their respective centers of influence:

Obviously in an article, we can’t explore these topics in depth, but we can cover the basics.

PSA Effectiveness
The literature is replete with case histories of PSA effectiveness, especially for TV campaigns where the data is much more solid due to Nielsen SpotTrac monitoring. Whether we are looking at the subject from the macro or micro level, there is ample evidence that PSAs help increase public awareness and stimulate response.

Rather than to get into specifics here, if you click on the Evaluation link at the top of the Articles home page, you will see several examples of how PSAs helped generate the desired response from the target audience.

Community Affairs & Station Image
Given the intense competition for local viewers, anything a station can do to increase its local visibility and strengthen its community franchise will undoubtedly result in larger audiences, and more loyal viewers. 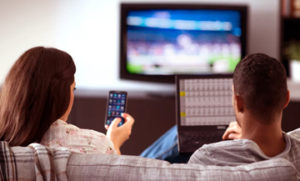 This, in turn, will ultimately increase station advertising revenue which is based on audience size. While all of us involved with public service believe in altruism, media general managers sleep better at night when they know they are showing increased audiences and revenues.

And, since at most media outlets the general manager controls the community affairs department, the connection between these different points is obvious.

The FCC Does Not Mandate PSA Usage
One of the biggest misperceptions about PSAs is that a lot of people believe the FCC requires broadcast stations to use a prescribed level of pro- bono messages. That is untrue.

What the FCC requires is that for their license renewal, stations must demonstrate that they are broadcasting in the public interest, and there are  various ways of doing that, one of which is to air PSAs. So, the question is, if they do not have to air PSAs, why do they do it? 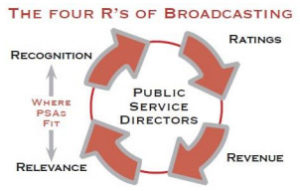 That is where the topic of branding comes into the discussion. A colleague of mine who was an expert in developing community affairs programs for radio and TV stations, taught me about a concept he called the Four R’s of Broadcasting.

The two most important things to broadcasters – or any media organization – are shown on the right side of this graphic.

Ratings mean audience, and of course the bigger the audience, the more Revenue any particular program will bring to the media outlet. However, people don’t watch programs based on how much revenue the programs generate. They watch them because the programs appeal to their interests, shown here as Relevance.

To the extent that the media are relevant to local community interests, they gain Recognition, and these two factors – Relevance and Recognition – are where PSAs come into the picture.

If viewers think that a station’s programming is more relevant to their needs, that outlet will attract more eyeballs. When one media outlet gets more eyeballs than their competition, you can bet the management will try to get as much recognition for their leadership in the market. While very theoretical and difficult to explain, unless one understands why the media uses messages from which they derive no monetary compensation, then one will never understand the nuances of public service advertising.

Importance of Localism
The second part of this discussion is the importance of localism. The producers of PSAs, most of which are located in large media and thought centers such as New York and Washington, typically look at the national picture. They are trying to generate as many Gross Impressions and value from a PSA campaign as they can, but at the same time they are overlooking an important fact.

What local media care about – and these are the entities that will generate much of your PSA exposure – are local issues, local news, local messages, because as stated earlier, that is where their audience is, and that is where their revenue comes from.

Shown below are the results of two surveys among 1,000 local broadcast stations on the importance of localism, which clearly show that local issues are far more important than other considerations. 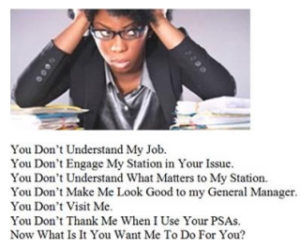 This leads to the final point. How can nonprofits help community affairs directors prove their worth to station management?

Since most community affairs departments are small one or two person operations with minimal budgets, most do not have sophisticated computer programs to track the number of PSAs they use for various non-profits. They are also deluged with requests for free airtime so this graphic is an example of a harried TV Community Affairs Director.

Conversely, as strange as it may seem, PSA distributors all have PSA tracking software, so one of our goals on the non-profit side should be to share what we know about PSA campaign performance with the stations providing the support.

While numbers on a page mean a lot to the PSA sponsor or producer, they are less important to the media. What they want to know is how did the PSA campaign make a difference to their audience?

What are some other ways the non-profit can help our station partners in their quest for more credibility, and increased resources? Here are several:

The bottom line of these different exercises is that the media community affairs professionals and non-profit organizations truly are in a partnership. We have, what biologists refer to as a “symbiotic relationship.” We need each other to affect positive change in our respective spheres of influence. Hopefully, we can help each other reach new heights of public awareness about pressing social problems confronting our nation and provide creative solutions.