Perhaps like never before, the bean counters at many non-profit organizations are closely scrutinizing mass communications budgets and reducing “unnecessary” expenses. What many accounting departments and chief financial officers may not recognize is that there is a direct link between an organization’s brand image and public willingness to financially support a particular non-profit.

Years ago McGraw-Hill, the publishing giant, created a famous print ad called “The Old Man in the Chair,” which has been modernized and made applicable to non-profits which rely on fund raising to achieve their mission.

The point of the graphic is that if an important stakeholder (customer, client or donor) doesn’t know anything about your service or your organization, it is very difficult to get them to support your cause.

A report published by Mullen, a full-service brand marketing consultancy, put this subject into concise perspective in light of today’s marketing climate:

“In order to help the American public regain comfort and carry on with their lives, Americans will seek greater relevance and meaning from the organizations and brands wishing to earn their loyalty.”

So, the first important point we need to establish is we must work hard to maintain and improve our organizational image in an era of downsizing and budget cuts. This means maintaining an aggressive public outreach program to include public service advertising initiatives.

But how do you achieve these seemingly conflicting goals, you ask? The answer may be to recycle.

Over the years, many of our clients have saved tens of thousands of dollars in production money by recycling an existing PSA campaign or an individual component such as a TV PSA. Some of our military clients have recycled the same PSA at least twice, and one of our non-profit clients has recycled a TV PSA three different times. Not only has this technique saved them a significant amount of money, the campaigns performed better in each successive time they were released. 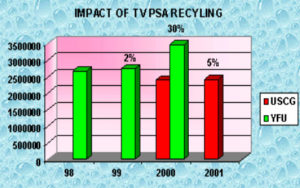 The Coast Guard is a comparatively small military service that prides itself in getting more done with fewer resources. This is particularly true when it comes to their public service advertising program. To save production cost, the Coast Guard distributed a TV PSA titled: “Hero” to broadcast TV stations, on two different occasions, but created new packaging the second time around.

For each release, the PSA was distributed to 1,100 broadcast outlets and 25 major cable networks. The PSAs were tracked using the A.C. Nielsen  SIGMA electronic monitoring service for 26 weeks for the first release and 39 weeks for the second release. As shown by the graph, the value of the second release increased by five percent over the initial release.

A more compelling argument for recycling is provided by a campaign we distributed three different times for the Youth For Understanding  International Exchange. YFU is a student exchange organization, which uses TV PSAs to recruit students and adult sponsors for their programs. 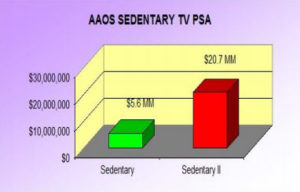 The most dramatic example of how a recycled TV PSA performed the second time around was a campaign we distributed for the American Academy of Orthopaedic Surgeons.

The PSA shows a young boy doing everything possible to avoid exercise including putting his dog on a treadmill while he watches TV on the couch. As shown by this graph, the campaign generated four times more value the second time it was distributed.

However, there were two factors which contributed to this increase. First, we began employing an outreach specialist to contact national networks to pitch our TV PSAs to them. Secondly, in the transition to Digital TV, stations were given up to six subchannels to use for expanded programming, and many of them used this increased capacity to air PSAs. However, when you look at it from the benefit-to-cost return viewpoint, the second release generated a phenomenal return, since there was no production cost.

Secondly, many stations do not have elaborate logging systems for the community affairs department. Since it is a non-revenue producing function, they may not know what ran previously.

However, when recycling a PSA, we recommend changing the title, so it may appear to be a new PSA and will be tracked under a different title.

Another way to stretch scarce resources is to find new media outlets for video footage you have already shot and paid for. On every film production, a lot of perfectly good film or tape goes unused that can possibly be re-edited for another release, saving the cost of shooting new footage. Given the popularity of video sites such as You Tube, you can post longer video pieces there to tell a more compelling story than is afforded by PSAs.

Also, if you have tape or film that was used for another project, i.e. a commemorative event, think about editing it down to a shorter piece and distributing it to either broadcast or cable TV.

For the Social Security Administration, we took a half-hour video tape and distributed it to cable stations and generated a substantial amount of new value from the release. Another client produced a half-hour program that aired as a paid show on broadcast TV. We distributed the half-hour program (two different versions) to cable systems and generated $4.4 million in exposure from cable usage.

If you do decide to recycle your PSA, make sure that you use a new Nielsen SpotTrac code so you will be able to distinguish the values of the recycled version from the original.

The one cost factor you need to consider when thinking about recycling PSAs is the talent payment. You need to ensure that you have arranged for the talent buy-out to cover the period when your PSA is in circulation.

So, the next time your boss or your organization’s financial manager calls you into the office to discuss budget cuts, think recycling. By far the biggest cost of distributing a PSA is the production cost, which you can save by reusing a PSA in your inventory, or think about using existing footage in an imaginative way.