Outdoor PSAs:
Reaching People Where They Live, Work and Play

Home/Outdoor/Outdoor PSAs:
Reaching People Where They Live, Work and Play
Previous Next

Outdoor PSAs:
Reaching People Where They Live, Work and Play

According to the Outdoor Advertising Association of America (OAAA), overall spending on outdoor advertising grew to $6.7 billion, the fastest growing local ad medium, with a 22% growth in the last decade.

One reason for this phenomenal growth – particularly for outdoor billboards – is that people are spending more time than ever in their cars, with daily vehicle trips up 110% since 1970, and the number of cars on the road has increased by 147%. As roads get clogged with cars, many more people are riding mass transit where we can reach them via subway posters, transit rest stops and interior/exterior posters on busses and subways.

With jet travel replacing trains and bus transportation in many cities, airports have as much annual passenger traffic as can be delivered by a major national broadcast network.  Today’s airports have posters just about everywhere, including next to terminal train stations, in baggage areas, concourses and waiting rooms.

According to media experts, out of home advertising has been bucking the downward trend for traditional advertising revenue for years.

And this is just the beginning. GroupM further projects that by 2024, out of home spending will outstrip the combined total for newspapers and magazines, with annual growth for the category between 2.5 percent and 4 percent. That means advertisers will put more dollars into outdoor ads than they will spend with the all print media components.

According to the OAAA:

A number of factors have contributed to this trend, including:

Improved measurement: Advertisers like to know what they’re getting, and over the past decade, better technology has allowed OOH to provide advertisers with qualified impressions versus the old “opportunity to see” measurement. As we’ve seen with digital, where ad fraud is a huge concern, advertisers want assurances that their ads will be seen by their target audience, and OOH can give them that.

No declines in audience: According to most media experts, the audience for TV, newspapers and magazines have been on the decline – particularly for print due to people getting more of their news online. 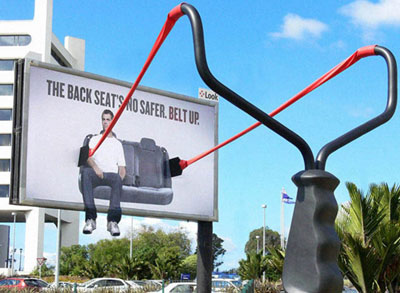 Creativity: Due to the limited time outdoor has to deliver its message, it brings out the best in terms of copywriting and design. Out of home provides a creative showcase while still communicating the sponsor’s message.

Resources:
On this same site, you can read an article titled: Outdoor Design Tips at:
www.OOHdesigntips/. By going to OAAA’s website at:
https://oaaa.org/CreativeLibrary.aspx
you can see examples of various creative approaches used in outdoor.

To view Powerpoint presentations for each of the different venues where we have placed PSAs, go to: www.slideshare.net/dakotabill.