How to Create A Top Notch PSA

How to Create A Top Notch PSA

Published in PR News and Reprinted with Permission

Who would turn down free publicity? PSAs are great way to snag a broadcast spot or print coverage – without shelling out any dough, Phil Rabin tells you the best ways to create a successful PSA.

Some of the most memorable messages presented by government, non-profit and even profit organizations include Smokey Bear, “Iron Eyes” Cody, McGruff the Crime Dog, crash-test dummies Vince and Larry, the United Negro Fund’s “A Mind is a Terrible Thing to Waste,” and “Friends Don’t Let Friends Drive Drunk,” are just a few of the more compelling public service announcements.

And these “free” messages are big business. The Advertising Council receives an estimated $1.8 billion in annually donated time and space for its public service announcements on radio TV, print, outdoor and Internet placements.

“There is no law which says a station must devote a fixed amount of time to community organizations,” notes Jeff Wurtz of News Broadcast Network in Ridgefield, CT.

Broadcasters air PSAs, because they fill the time they could not sell and in the process “pad” a show to its desired length. Likewise, newspapers and magazines use PSAs as space fillers.

“Perhaps the single most important – and most often neglected task that should be completed is pre-campaign research,” says Bill Goodwill of Goodwill Communications, in Burke, VA. To be successful, he argues, organizations must learn all they can about the problem being addressed in the PSA and the audiences being targeted for the message. 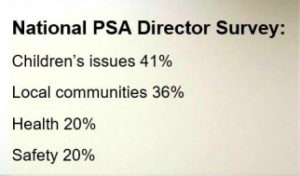 Given the volume of material received by public service directors, PSAs compete for limited broadcast time or print space.

According to a national survey of PSA directors, they tend to favor causes important to society at large and relevant to local audiences. Children’s
issues (41%), local communities (36%), health (20%) and safety (20%) were the most popular topics with stations.

Beyond the message itself, a number of other considerations must be addressed. The material must be as professional as the print or broadcast ads that may “bracket” your message. Also, make sure your message is timely, produced in different lengths and sizes and conforms to the correct formats required by the media.

One traditional approach is to get a celebrity to present an organization’s message. But Tim Bahr with Orbis Broadcast Group in Chicago notes that celebrity is particularly effective if he or she has “mass appeal” and ideally, a personal to the topic. Greg Jones, VP of Medialink, warns that  “celebrity spokespersons are good, but if they are affiliated with one network’s series, it may be more difficult for the other networks to air it.”

While PSAs are normally associated with non – profits, there is still a place for profit organizations. Pharmaceutical companies with a new drug for a particular disease or conditions may team with a non-profit that represents people suffering from the illness. “The PSA usually tells viewers if they don’t have to suffer and that there are new treatments available.

Measuring the success of a television PSA is done through various services, although it adds to the cost. One approach, Nielsen’s SpotTrac system, adds electronic data to television PSAs that can be retrieved by special receivers across the country. Nielsen data provides information on when and where the spot aired, how often the spot aired, the estimated value and Gross Impresssions for the campaign.

PSAs can gain major exposure. A Porter Novelli campaign for the National Institute of Mental Health generated more then 10,000 airplays for message on anxiety disorders. 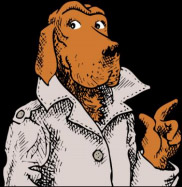 A Salvation Army campaign reached more than 43 million Americans. And 98% of children between the ages of six and 12 recognize McGruff the Crime Dog.