“In Your Face”, All the Time — Excerpted from Wall Street Journal

Finally, someone is making real money off the Information Superhighway. While Internet companies struggle to profit from selling ads on their Web sites, adman Adam McGinty is selling space on billboards along Highway 101, which cuts through Silicon Valley.

It has been a bonanza for the 25 year old. Mr. McGinty and his employer, Eller Media, the company that leases most of the billboards on the 48 mile strip between San Francisco and San Jose. Eller’s revenue from high-tech companies has doubled every year for the past three years, to $66 million. Mr. McGinty, while not as rich as the tycoons he deals with daily, at least is doing well enough from his commissions to drive a new silver BMW 323i.

Easily Ignored
The paradox of futuristic tech types resorting to a form of advertising that is old hat, lowtech, and hardly environmentally correct, isn’t lost on Mr. McGinty or his colleagues in the ad world. So far, they say, Web ads aren’t working all that well. Only about one of every 200 viewers of an Internet ad actually clicks through to the advertiser’s Web site. “People kind of ignore them,” says Michael Feldman, marketing manager at Fogdog, an online sports store that is beefing up its offline advertising.

Billboards, on the other hand, are hard to disregard. “You can’t turn them off, or change the station, or link to someplace else,” Eller marketing manager Julie Kim says of the outdoor ads. They are “out there … in your face … all the time.” 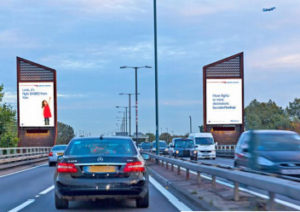 That’s especially true along Highway 101 where 200,000 drivers get stuck In rush-hour traffic twice a day. It’s a captive audience of high-tech commuters, engineers and venture capitalists among them who spend hours battling one another getting to their Silicon Valley offices, only to battle one another throughout the day. “You spend so much time in your car, anything that can visually distract you becomes attractive,” says Rebecca Baer, who works for TiVo Inc., a Sunnyvale, Calif., start-up.

As a result, companies pay as much as $53,000 a month to get their name out or just to get under each other’s skin, far more than the typical $25 per 1,000 “sightings” or the number of times an ad flashes on an Internet site.

A few years ago, Informix Corp. put up a billboard near rival Oracle Corp.’s headquarters, picturing a prehistoric beast and warning drivers they were in a “Dinosaur Crossing. ” Today, the Informix board features a geeky looking guy peering through Coke bottle glasses to tell passersby: “Dumb data can blur your vision.”

Luddite Logic
The, billboard mania suggests Luddite logic still lingers in the high-tech heartland. CAT technology Inc.’s start-up team in Los Gatos, Calif., say futuristic fears tether them to low-tech boards. “If you have all your ads online and the Y2K bugs wipe them out, you wouldn’t have anything left, would you?” says marketing manager Dennis King laughing.

And while the demand turns off environmentalists decrying billboard blight, Mr. McGinty says the attitude he encoun-ters among CEOs who must wait months for the hot outdoor marketplace is: “Just build another board.”

Given 101’s zoning, he can’t. But that’s not stopping companies that “want 101 or nothing, ” Mr. McGinty says. One online ad broker is trying to get a special permit to erect a billboard on a barge and anchor it in San Francisco Bay along 101. Another high-tech company took to the skies, trail-ing a billboard size banner from a biplane that circled over the congested highway during rush hour.

Adauction.com, an online ad broker, offered this communique from a placard on Route 101: “Next item up for bid: this billboard.” Two local tech firms paid twice the going rate for the space, locking it up for five months. (The Wall Street Journal Interactive Edi-tion has rented billboard space on 101, too.) 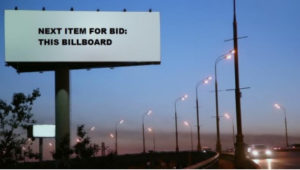 Mr. McGinty and other ad executives here view some of the billboards as a joke, totems to the vanity of high-tech execu-tives preaching to the converted rather than reaching out to consumers. “It’s ego marketing, plain and simple,” says his as-sociate, Ms. Kim.

Obscure Messages
Mr. McGinty rolls his eyes at some of the obscure messages on signs he sees driving along 101: “Our Uni-verse is Deep Submicron IC Design Automation” and “Stream Until You Burst.” But with ambitions to go public, companies want to get their name known to other tech-types and potential investors. It “means zero to you or me,” he shrugs. “It means everything to them and their employees. ”

Increasingly, tech firms actually try to explain what they do: “It pauses live TV. It records without videotape. It’s Called TiVo Can’t Miss TV.” Others try interac-tive gimmicks or play off the news. “Bill Gates, there’s a message for you at egreetings.com-ings.com,” an online card company’s bill-board tells him and anyone else who sees it. Click on the company’s Web site and up pops the birthday of Mr. Gates’s antitrust nemesis, Attorney General Janet Reno, with the message: “We hear she likes tulips. Just thought you’d like to know.”

And with money to burn, wealthy start-ups are making this old form of advertising seem almost high-tech. Online broker E*Trade’s billboard has huge computer keys labeled “Control” and “Shift” that, pop out beneath the message: “Put the Power Back Into Your Own Hands.” Ad-vertising director Deborah Italiano says the company plans to use more so?called “extensions” and may even try 3?D or ani-mated billboards? “something
beyond a static message,” she says. 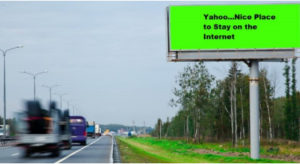 And E*Trade isn’t alone. Yahoo! Inc. re-cently built a permanent purple and yellow neon sign along 101 that projects the feeling of roadside motels or Holiday Inns of yore. For about $30,000 a month, the portal com-pany flashes the message: “Yahoo! A nice place to stay on the Internet.”

The company plans to hoist a similar sign this month in Manhattan’s arty SoHo district. “We wanted to do something unexpected in a few high- profile locations,” says Yahoo’s Vice Presi-dent of Brand Marketing, Karen Edwards.

When Mozart Development Corp. de-cided to build an office park on 101 last year and tore down an old theater where lounge acts performed on a rotating stage, they kept the Las Vegas-style electronic sign. Once it’s up and running, Mozart hopes to get 10 tech companies advertising on each side to reach drivers going north and south. Donna Loughlin, spokeswoman for Central, a start-up with headquarters in the new building, laughs: “We joke that sign’s going to have its own IPO.”