Behavior Change in the Old and New Eras

Behavior Change in the Old and New Eras

Does anyone know when the line was crossed between the old media and the new media? Was it when people were able to send “Amber Alerts” via the cell phone to alert people that there was a child molester in their midst?

Was it when You Tube allowed everyone to have their thirty seconds of fame by posting their favorite videos online in full color and decent sound? Or was it when some genius geeks invented things such as iGoogle, Netvibes, Pageflakes, SpringWidgets, yourminis, Flickr, social networks, blogs, RSS feeds, podcasts, wikis and personal homepages on sites like Facebook?

The answer is….nobody knows. And nobody knows how all these new terms and communications techniques will affect the world around us in the future. The very moment this article is completed, it will be completely out of date. That is how fast things are changing. However, at the risk of trying to stop technology for just a moment to figure out how these new trends will affect most of us, we would like to make a few fundamental observations. We believe these basic truths will serve all of us well in the years ahead as we watch the transformation of mass media to something much more personal. 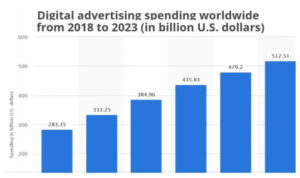 Who Cares?
First, the background – why should we care about these trends? According to a recent research report, digital ad spending in the U.S. will reach $517 billion by 2023. The big fish are already starting to swallow the minnows, as indicated by the purchase of YouTube by Google, and the purchase of Instagram by Facebook.

Consider just these facts alone: Facebook currently has more than 500 million active users worldwide. You Tube has 1 billion unique users each month. Google has three billion searches daily. With audiences such as these, all of us have to pay attention to the new world of media. Perhaps more importantly, many of these new social media sites are being used to educate the public about important social issues and bringing people all over the world together to address them in meaningful ways. That is the real power of this new media world.

Other facts to consider from a survey conducted by Cone and Opinion Research Corporation: 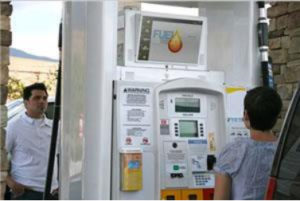 Changing Media Landscape
The media landscape itself is changing faster than our ability to adapt to it, with new media popping up like mushrooms in a pasture field. When you pump gas, you may see a video screen with programming and commercials. If you go to the restroom, there may be signs in the stalls.

When you work out at the health spa, there likely will be signs and video monitors throughout the gym. Banks, supermarkets, commercial buildings, airports, airplanes, shopping carts, parking lots and almost every other public space is being used to promote products, services and causes.

If one is successful in getting their message out in all these venues simultaneously, then over time, the desired behavior change may take place. But that would take a huge budget that most non-profits do not have. Most non-profits must rely on earned media, Public Service Announcements  (PSAs) and guerilla marketing tactics to get their message out to their stakeholders. 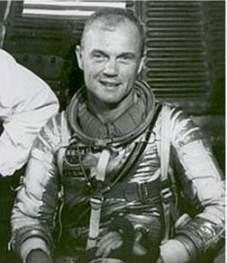 The Old Era
As an example of how public action resulted in the old era, we distributed a TV PSA campaign for the National Institute on Aging to promote exercise among the elderly. The centerpiece of the campaign was John Glenn, America’s first astronaut to orbit the earth. At the end of the TV spot, the public was encouraged to write for a free Exercise Guide. TV PSAs were the primary method for promoting the Guide, and the campaign generated 35,000 phone calls to a dedicated 800 telephone line, along with 300,000 orders for the Guide.

So far, so good…but what does this mean in terms of behavior change? No one knows for sure, and that is why we have to look at new ways to engage people using new media tools.

The New Era
To show how this works in the new media era, our software development company developed a Facebook application to encourage people to exercise and share their exercise regimen with their friends. Here are some activities people can do on the site: 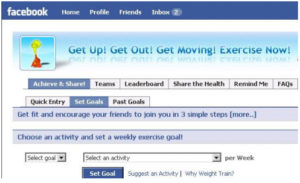 The migration of media to the internet is a confluence of three factors.

Linking Media to Behavior Change
To do this however, we need a medium which allows certain behaviors to be captured and for it to be clear that the behavior has a relationship to the message source. Behaviors we want to measure include: 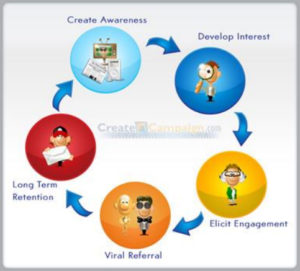 Audience Engagement
The set of behaviors above correspond to what is termed “engagement” in new media parlance. Engagement constitutes a deeper connection between the audience, the message and the message provider. As shown in this flow chart, once that process begins, it can be repeated over and over again, building more synergy and momentum over time.

Using Mobile Technology to Address Causes
Another way new media is being used in our techno-society is the use of cell phones to support important public causes. CTIA-The Wireless Industry, has developed radio PSAs that instruct cell phone owners how to donate money in times of national emergencies such as wildfires and hurricanes.

CTIA also has a national PSA campaign to alert the public about child abduction via the Amber Alert system which has a goal of getting a million people to register. AMBER Alert is a voluntary partnership between law-enforcement and transportation agencies, broadcasters, and the wireless industry, to activate an urgent bulletin in the most serious child-abduction cases. The goal of an AMBER Alert is to instantly galvanize the entire community to assist in the search for and the safe recovery of the child.

To summarize, in the old era, conventional media was meant to create awareness and some type of response. In the new era, social media is meant to increase involvement and spread the message to others, thus building a much larger audience, as well as one more deeply committed to a cause than what was possible a few years ago.

For a more detailed discussion of how social media is changing the media landscape, go to PSA BOOK.