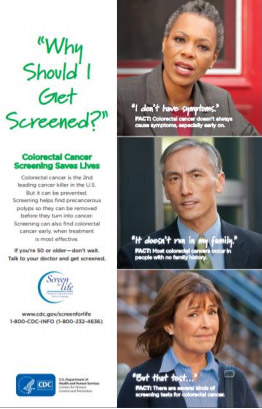 A research study conducted recently by the Advertising Research Foundation (ARF) concluded that PSAs can induce significant changes in public health behavior. Entitled “A Strategic Research Approach to Measuring Ad Effectiveness,” the project was jointly sponsored by the ARF, the Advertising Council and the American Cancer Society. The study centered around a 30-second PSA encouraging people to ask their doctors about colon cancer tests.

The study took two years to complete and cost an estimated $1 million, with nearly all the funding donated by the advertising, research and media communities. Its objectives were to:

According to the report summary, “in one of the toughest and most challenging areas for advertising today – that of changing attitudes and behavior for health-related issues — the use of public service advertising alone not only increased awareness, but also reinforced people’s belief, fostered their intent to act and inspired potentially life-saving action.” 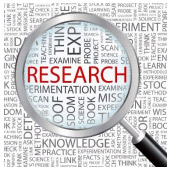 The campaign ran in four test markets — Eau Clair, Wisconsin; Marion, Ohio; Grand Junction, Colorado; and Pittsfield, Massachusetts. These are markets often used by major consumer advertisers because they are established and controllable, the study said.

An equal number of target households, including the target audience of adults 40-69 were chosen in each market, and each market was divided into two advertising cells. One cell was exposed to an average level of PSAs and one above average level.

The campaign consisted of one 30-second PSA which ran from July, 1989 to July 1990, during which researchers conducted telephone interviews with adults over 40 who lived in the target markets before, during and after the test.

To control media placement, three national advertisers – Procter & Gamble, General Motors and Gillette – donated some of their paid advertising time for running the PSAs. Under the arrangement, the PSAs were cut in over time slots paid for by the corporate sponsors and carefully monitored.

During the 12-month test period, the PSAs were broadcast an average of 565 times in all four geographic regions. Slightly less than 40 percent of the spots ran during the day and prime time dayparts with about 17 percent in early news and 8 percent sports programming The value of the broadcast time was estimated at $21.3 million.

The commercial used in the study was termed a “slice of death,” which opens at a gravesite and runs backward to a hearse, hospital and a woman reading a newspaper who informs her husband, that colon cancer is 90 percent curable if treated early. The husband responds with “I have more important things to worry about right now.

“Nearly 43 percent more – and 71.4 percent of the men – said they had actually consulted their doctors about colon cancer.”

Dr. Jay Winsten, director of the Center for Health Communication at Harvard’s School of Public Health, called the study “impressive and important.”

“The literature is replete with failed media campaigns,” he said, and the reason they failed is the creative was not good; they were not based on research; and they had inadequate exposure or targeting of the message.

Last year, Dr. Winsten was the co-author of a report recommending that public service advertisers use marketing techniques like corporate sponsorships and dialogue in television shows to strengthen their efforts to change public behavior.

Advertising aimed at dissuading people from smoking or taking drugs has been studied extensively in universities. A study conducted by Stanford University in the late 1970’s for example, found that print and broadcast PSA’s could significantly induce people to change habits that put them at risk of heart disease.

But, as most experts point out, these studies, including those undertaken by the ad industry itself, have been unable to separate the effects of advertising from those of news coverage, editorials and publicity. 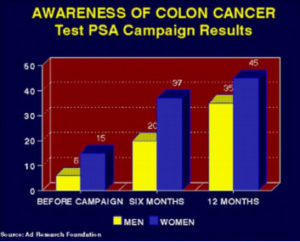 PSAs Build Awareness – Awareness among those exposed to an average level of advertising increased from 11% prior to the campaign, to
29% after six months and continued to build, reaching 40% of the target households at the end of 12 months.

PSAs Can Be Used to Reinforce Positive Beliefs – When beliefs are widely held, a PSA campaign can reinforce those beliefs and inspire action.

In the study, people in the target markets were asked to answer the statement “if colon cancer is diagnosed in its early stage, it can be cured 90% of the time.” The number of viewers exposed to an average level of advertising who believed this statement increased from 69% to 73%.

PSAs Can Motivate People to Action – The study found that PSAs can move people to action with an average level of advertising. It also showed that sustained advertising and targeted media placement are critical in maximizing the effectiveness of PSAs. The number of men who took action as a result of being exposed to an average level of advertising for a full year, increased from 7-12%, and from 7-15% among those exposed to above average levels. At the six-month point, however, there was either minimal or negative change in behavior.